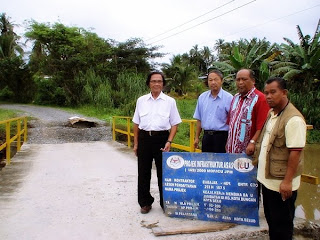 COLLAPSED…. Hiew, Edward, Aminudin and Laiman photo in front of the collapsed bridge.

A NEW bridge in Kg. Bungan, Kota Belud had collapsed shortly after its completion in April 2009. This new bridge was constructed under the Rural Infrastructure Development project (ICU) with the Prime Minister Department (JPM).

The Pakatan Rakyat team who made a visit to the site after being told of the incident was made up of the DAP KK MP Hiew King Cheu, Vice Chairman Edward Ewol Mujie, John Lee Kim Seng, and from PAS were the Sabah Deputy Commissioner Mohd. Aminudin B. Aling and the Publicity Chief Ag. Laiman b. Hj. Tkin.

It is surprising to see that a new bridge that had been completed fell into the river and no longer able to serve to link up with the nearby kampongs. This is a vital short cut from the main road to the kampongs and now the kampong folks had to travel on a long detour to reach home, especially on bad unsealed road.

Pakatan Rakyat leaders felt sorry to see the stage of the collapsed bridge which meant to be well constructed and solid to cross the river, but now it is no longer serviceable. The foundation of the bridge abutment had failed that caused the collapse of the bridge up to some 3 feet deep. 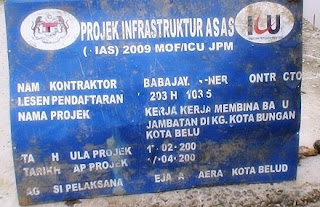 The concrete bridge is now beyond repair and needed to be rebuilt totally. The inspection has shown that the piling to the abutment/bridge head was not sufficient or none at all, that is insufficient to support the weight of the bridge.

This is definitely another project under the ICU of the Prime Minister Department that had fouled up and ended in disaster. The public money had been wasted and someone will have to take up the responsibility and made answerable. What happened and what is wrong with the design, the workmanship of the contractor, and the supervision by the ICU? 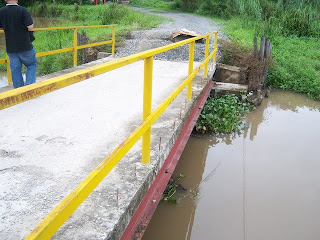 Pakatan Rakyat seek explanation from the ICU and the responsible government department on this incident because of public interest and due urgency. We cannot have this type of development project went ‘undercover’ as if nothing had happened, and maybe there are plenty more in the Kota Belud district.

The general public is welcome to approach the PR reps to inform them of any problem in their area to ensure that the government spent their money wisely and truly.