IN PURSUANCE OF STATES' POLITICAL AUTONOMY 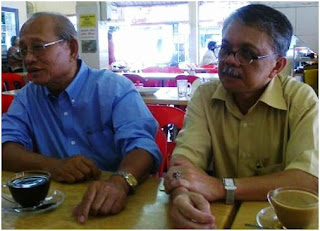 KOPI O…SNAP's President, Edwin Dundang (left) and Hj Amdee Sidik of SAPP had a light moment for kopi o at one of Kuching's kedai kopi.

SAPP leaders from Kota Kinabalu paid a visit to SNAP in Kuching last Tuesday upon invitation by the later. The visit had been arranged for sometime but speeded up because of the Sarawak State General Election, which polling day is to take place next month.

The visit was just to make known to each sides that both SAPP, Sabah local based political and Sarawak’s SNAP appreciate each others’ struggle in particular on the issue of States' political autonomy which was agreed by Malaya, Singapore, Sabah and Sarawak prior to the formation of Malaysia 1963.

The agreement found in what is called 20 points for Sabah and 18 points for Sarawak. Of lately, talks on the subject have been much accelerated, as topic of Borneo Malaysia yet remains untouched by Federal government leaders.

Leaders from both political parties continue to pursue to fulfill what was contracted not until people in the states decide otherwise.