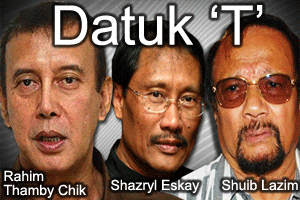 THIS is a message from a person who lives in the Malaysian Border of the Borneo Rain Forest :- “Politics must become more attentive to those everyday conditions that have allowed the ‘rakyat’ to remain complicit with such lopsided policies and gutter practices.”

Exposing the underlying conditions and symptoms of a culture of lying and deceit is both a political and a pedagogical task that demands that people speak out and break through the haze of official discourse, media-induced amnesia and the fear-producing lies of corrupt politicians and the swelling ranks of hatemongers.

The politics of lying and deceit at the current historical moment offers up the specter of not just government abuse, mob hysteria and potential violence, but also an incipient authoritarianism, one that avidly seeks to eliminate intelligent deliberation, informed public discussion, engaged criticism and the very possibility of freedom and a vital democratic politics.

The politics of lying and the culture of deceit are wrapped in the logic of absolute certainty, an ominous harbinger of a kind of illiteracy in which one no longer has to be accountable for justifying opinions, claims or alleged arguments. Stripped of accountability, language finds its final resting place in a culture of deceit in which lying either is accepted as a political strategy or is viewed as simply another normalized aspect of everyday life.