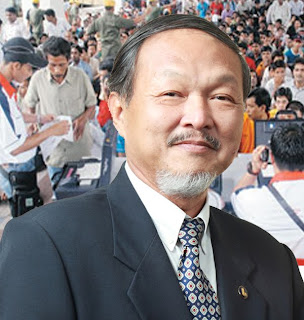 A WRITTEN answer from the Prime Minister Department concerning a question raised by the DAP KK MP Hiew King Cheu on the reason why the population had increased from the early days of only half a million during the 70’s to now a staggering number of some 3.2 million people. The rate of increase is very much higher when compared to Sarawak and Semananjong for the same period.

The reply said that the population figure is based on a 10-yearly survey and censorship on the Sabah population growth conducted started from 1970, 1980, 1991, 2000 until 2010. The survey is divided into 3 categories to check on the total number of local citizens, immigrant workers, illegal immigrants, and the refugees.

The figure on the foreigners in Sabah can not be ascertained because the foreign workers, illegal immigrants are on a high mobility and cannot be easily traced and recorded and it is different with the refugees in Sabah who were given the Permanent residency (PR).

The total population can change depending on the total numbers of the foreign illegal workers and on the action of the government enforcement to deport them. The action on catching and clearing these illegal immigrants (PATI) and enforcing that the foreign workers whose work passes expired will be taken straight away.

From the figures in the list provided, it is surprising to see that in Sabah during the 70’s there is only some 651,304 Malaysian and the same during the 80’s with only 929,299 Malaysian. There were totally no foreign workers or PATI recorded in the list provided by the Parliament which was prepared by the National Security Council of the Prime Minister Department. 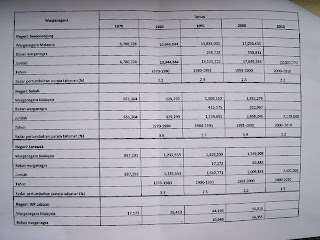 In the 90’s, a figure of 425,175 foreigners was recorded, and for 2000s there is 552,967 foreigners. How true are these figures and whether these figures telling us the real situation in Sabah? It is definitely far off from the actual situation on the ground in Sabah.

The population has increased tremendously from 929,299 people in 1980 to 2,468,246 in year 2000 to a staggering number of up to 1.5 million in 20 years. This is surely too much for a small state like Sabah to produce such a massive increase in Population. Where are these people coming from?

The final figure on the 2010 is another big shock, and it is standing as high as 3.12 million, and this is another big increase of 651,000 people from 2000 to 2010. It is only the increase for the 10 years in Sabah. Besides, there are many PATI and foreigners who were not being registered as explained by the department.

The only logical explanation to the explosion on the population in Sabah was simply that it is because of many of these foreigners whether legal or illegal were being given PR and some even had obtained Mycard and become Malaysia citizens.

Hiew urges the Malaysian be very careful in this respect, because there are long term implication and adverse effect on our nation and its people. It is not only because of politic gain by having more imported voters but also true that we must try to protect the interest and the rights of the original local natives of Sabah and other Sabahan as a whole.

Eventually their rights and privileges will be eaten up by these foreigners turned Sabahan. Many of them when had obtained Mycard have moved to Semananjong too. Lets us not create any more ‘New Bumiputras’ in Sabah for the sack of our precious future generation, enough is enough!