‘FITNAH’ IS WORSE THAN MURDER 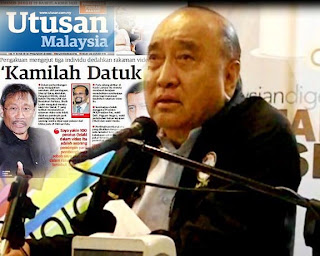 “I had issued an offer of a RM100,000 (One Hundred Thousand) reward to anyone who is able to provide information leading to the arrest and conviction of one ‘Datuk T’ for rumour mongering and causing public unrest.

Yesterday ‘Datuk T’ surfaced to identify himself. Thus, the offer is rescinded. At the same time, I call on the police to fully investigate this matter and for the AG to prosecute the right party once an offence has been identified. Underlying this whole thing is the principle of justice and truth. No one should be maligned publicly for certain objectives- whether political or personal.

I made that offer because I had myself been a victim of such malicious rumour mongering and persecution. I am sure those who had suffered such venomous attacks would agree with me.

Our Minister for Communication YB Rais Yatim was recently such a victim of false allegations of rape. There were also others amongst the top echelons of our leadership including being victims of allegations of murder.

Thus, as a matter of principle we should reject such acts which would sink our country into the abyss of Gutter Politics as in the saying; ”Do unto others as you would want others to do unto you.” Islam also condemns ‘Fitnah’ (slander) as in the saying “Fitnah is worse than murder.”

The politics of this country is reflective of our mindset. Our leaders should be exemplary of how we should behave. If we are pre-occupied with perverse issues, do we want our future generation to do the same? Where will that bring our country?

The politics of governing should be based on the Rule of Law and not by the Law of the Jungle. If laws and conventions are not followed in passing laws, these are not just bad laws but also bad leadership.

Recently, a brave High Court Judge from Kota Kinabalu struck down the Constitutional amendment that permitted the Federal Govt to appoint Judicial Commissioners without consulting the YDP Negeri of Sabah and Sarawak.

While the act of that brave Judge is to be lauded, that is also a reminder that our Federal Govt must respect and adhere to the promises made during the formation of Malaysia.

Rights cannot just be disregarded or removed. We are constantly reminded of the Social Contract that has enabled the people of all races to live peacefully and harmoniously since our Independence.

Thus, as we approach the Sarawak State Elections, I hope those vying for the people’s vote would be reminded that they would later be held accountable for all the promises they make during election campaigns.

I pray that there will be a peaceful and orderly state elections and I call upon all sides to act in accordance with the directions of the Suruhanjaya Pilihan Raya (SPR) which should also act impartially to ensure a Free and Fair Elections.

“Humbleness Is Good Virtue, Arrogance Shall Fall, The Meek Will Rule The World”.