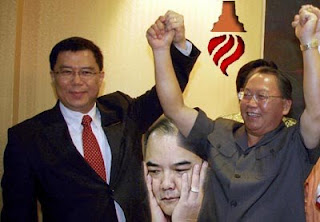 Musa Aman has created a situation whereby both Deputy Chief Ministers are from the same party, i.e. Parti Bersatu Sabah and the Chief Minister is of course from UMNO. This shows how unequal the relationship is within BN Sabah when it consists of six component parties, not two

The callous manner in which Sandakan UMNO Youth Chief Haji Awang Kadin Tang dismissed and belittled LDP’s complaint of this matter is testimony to that fact. He is reported to have said that, “LDP makes the most noise, incessantly barking and whining that they deserve this and that.”

Thus, I suggest to LDP that it’s time that they gather the self-respect to sever ties with UMNO and quit BN once and for all, as Sabah Progressive Party did in September 2008. Tell UMNO that enough is enough and LDP is not going to take it anymore.