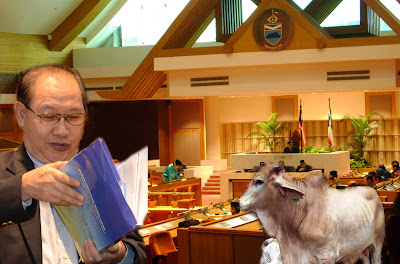 In expressing his disappointment over the conduct of the State Assembly sitting, Bingkor Assemblyman Datuk Dr Jeffrey Kitingan (photo) even described the august House as a cowshed.

“This place is like a kandang sapi (cowshed), there is no discipline, no control, no freedom of speech, and they (Barisan Nasional elected representatives) ganged up together from the backbenchers, to the ministers, right up to the Speakers.

“And here I also find that the Speaker is even involved in the argument, in making comments and debate, when he is supposed to control the conduct of the session,” he lamented.

He also expressed regret over the poor conduct of the BN policymakers, claiming that this was as a result of their long indoctrination by their political masters.

“They (backbenchers and ministers) are taking advantage of the Speaker (who is Datuk Seri Panglima Salleh Tun Said Keruak, the Usukan Assemblyman).

“They kept interrupting, raising the Point of Order and asked for ‘penjelasan’ (explaination), but instead of asking me, they go around talking about it. And the Speaker does not adhere when I pointed out it was not right.

“And I am surprised that there are things I can say outside but I cannot say inside the House, which is supposed to be the other way around. Words like ‘autonomy’ and ‘negara’ (country), that is why I am very disappointed … we are supposed to progress from those colonial and old days to better days,” he said.

Jeffrey pointed out that all assemblymen must work together for the country and the people.

“We are one system, we are in the same system, the government have their role, so does the opposition. So why not let us do our part and express our part and let them (ministers) listen, and let the people listen and if it is good.

“I was not even attacking the government, just merely giving suggestions how to improve the finance of the government, how to claim our rights and revenue from the collection of the federal government,” said Jeffrey.

He said the state government may claim its rights under the Schedule 10 of the Constitution to recover 40 per cent of the revenue that is elected by the federal government and back to the state.

“This is the Constitution. Imagine 40 per cent of RM40 billion, where this year they are projecting to collect RM40 billion in taxes, which is the nett revenue minus capitation and road grants.

“Let’s just say the minimum after deducting the two grants that may not even come up to RM5 billion, we will have RM35 billion.

“So 40 per cent from that is RM14 billion, which is additional fund for Sabah plus the RM4 billion they collect from the state government. We can have about RM18 billion in state revenue and it is much better than the RM4 billion we are getting now.

“And the same thing goes with the oil taken from the state, which is taken improperly. I suggested that we request for a review because it is within our rights, we are not asking something that does not belong to us, we can have that and have the right to impose royalty on our own, but royalty was denied to us,” he said.

“Imagine if we collect 10 per cent royalty which belongs to the state as the one they (federal government) paid to us is not oil royalty, because we have been asked to reject our own rights to collect royalty under the Section 4 of the Oil Agreement.

“Add up to the taxes which is RM18 billion, what we have is RM25 to 26 billion in revenue, that would be much better for the state so we can carry out much better development and resolve a lot of problems. We do not even have to beg the federal government to give the money,” he said. (BI)
Posted by sabahkini.net at 19:27