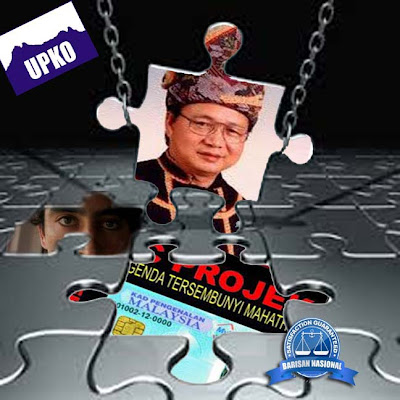 This study which we have named the UPKO Initiative is and will be a huge contribution to Sabah and Malaysia.

I feel that our contribution to the solution of the problem of illegal immigration in the country must not depend on hearsay but must be backed by evidence which can be pursued further by the authorities concerned.

The UPKO Initiative is a comprehensive study that includes 1000 interviews of which 400 are Sabahans and 600 of them migrants including legal migrants, illegal migrants and those who have obtained Malaysian documentation illegally. The break-down of respondents are as follows:

logo-UPKOApproximately 400 respondents have obtained IC’s and Malayian documents illegally, via false surat akuan sumpah, IMM13 to IC, purchase of IC’s and Projek IC (all of them have entered Malaysia /Sabah illegally)

The remaining 200 have come in legally, most have lapsed passports, or have come on a temporary visit pass, and have not returned to their home country. Only about 30 have valid passports and work visas.

WHAT IS DIFFERENT ABOUT THE UPKO INITIATIVE?

Firstly, it is the largest qualitative study in Malaysia, which through the use of interviews and transcripts provide a documentation on the views of Sabahans on the issues of illegal immigrants, their impact on our way of life, their encroachment into the local economy, the displacement of Sabahans due to them and also what we need to do to rectify the onslaught of illegals.

From the migrants, we can understand their motivation to be in Sabah, their modus operandi in getting citizenships, their social networks and their experiences in Sabah, everything from exploitation to corruption from various quarters.

Secondly, through reliable data the UPKO Initiative provides, we will come up with a series of suggestions for reform to bring an end to the perennial problem of illegal migrants and its impact on Sabah and her people.

Through this study we have been able to prove:

Every migrant who has obtained Malaysian documentation be it birth certificates or IC’s has done so illegally and contravening the Constitution of Malaysia.

In 13 locations in this study, after collecting data from a large segment of migrants, we have discovered a total disregard of the Constitution of Malaysia be it Malaysians who sell or give away documents or migrants who buy it or obtained it illegally.

There is no doubt that the problem of illegal immigrants and “illegal” Malaysians is real and needs a final and comprehensive solution.

Malaysian documentations are obtained through many illegal means notably being purchased from syndicates or Malaysians selling their personal documents or being provided documents through government agencies unconstitutionally.

Many culprits are to be blamed, civil servants, document traders, village folks and Ketua Kampungs. A solution to the problem must be to put an end to the supply by making it both unprofitable business to embark on and also a genuine fear of the strong arm of the law.

The problem of increasing number of illegal migrants in Sabah is due to the availability of jobs in various sectors.

EMPLOYERS CANNOT DISREGARD THE LAW FOR THE PURPOSE OF PROFIT

Here lies a major problem, while the economy of Sabah needs labour, employers should be held accountable for who they hire. They cannot expect to totally disregard the law for the purpose of profit and self-gain at the expense of national security and the rights of other Malaysians.

It is hoped that higher wages for Sabahans and the acceptance of the minimum wage would bring about a higher quality of life of our people and at the same time reduce dependence on foreign labour. In any case, if the need arises for foreign labour, it must strictly be “legal” labour force regulated by the government.

Family and ethnic affiliation are key factors in the promotion of migration into Sabah and these institutions provide shelter, protection from the law and eventually towards assisting the new illegal migrants in getting Malaysian documentation.

This point should not be taken lightly. The study shows that migrant workers who have obtained Malaysian citizenship illegally have made it their priority to bring all their family members over to Sabah.

There is a real risk of “real or original” Sabahans becoming a minority in our state. This fear is prevalent not only among thet KDMs, but also the Bruneians, the Bajau-Sama, the Sungai and the Bisayah.

THERE ARE REPORTS EVEN OF BRIBERY.

This study has identified numerous entry points, showed how our own islands are used by illegals as stepping stone into Sabah. We also know the price of indifference towards illegal immigrants by the Lahad Datu incident that if we don’t control our boundaries, we stand to be invaded.

This study further highlights key structural weaknesses of government agencies notably in failing in their duties to curb the problem of increasing illegal immigrants and the illegal transaction of Malaysian documents.

The problem we face today is compounded by the failures of key government departments notably JPN, the police, immigration, customs right down to enforcement agencies in towns and cities. There are reports even of bribery.

Many respondents have spoken of such actions and therefore it is not an isolated incident but state wide.

The study is conclusive that the original Sabahans are deprived of economic opportunities due to the presence of illegals and those who have obtained Malaysian documentation illegally.

As is always the case migrants do provide cheap labour and when they do “graduate” into doing business themselves they can overcome local competition as they have access to low wage workers from their community who are already here or source from their home countries.

The study also shows that the social networks of immigrants can complicate actions which need to be taken to combat acts of terror in the future (the incidences in Lahad Datu and Semporna are merely tips of the iceberg).

This study is conclusive in how kinship and ethnic affiliations among illegals and illegal Malaysians is a challenge to national security.

In every location in the study, ethnic affiliation and kinship have allowed foreigners to enter into Malaysia, provided not only housing and food but also protection from the law. In all cases also, the providers of shelter and food also play a critical role in getting Malaysian documentation for the newly arrived illegals.

This study would be useful in assisting the RCI to look into some of the term of reference. Among them:

On how Malaysian documents have been obtained against the processes set in the Federal Constitution.

ON THE INCREASE IN POPULATION

·         The need for the new laws and new operating procedures

Let me briefly talk about a few laws and actions we propose:

We strongly advocate that the sanctity of the Constitution of Malaysia be upheld.

(a) was obtained by means of fraud, false representation or the concealment of any material fact

Therefore, all efforts must be made to strike off all Malaysian documents obtained contravening the Federal Constitution.

We therefore recommend to this Commission that in order to ensure the integrity of our Identity Cards, every Card should be verified by a competent authority appointed for the purpose . This body can be a special task force comprising officers or professionals from the private sector or even from the civil society movement.  Transparency must be assured. We replace our ICs periodically and therefore there should be no misgivings on the part of any one to surrender his or her IC for the purpose of verification and after which re issued with a new one beyond reproach.

NO COMPROMISE WHEN CITIZENSHIP OBTAINED THROUGH DUBIOUS MEANS.

I understand that there are problems in implementing proposed remedies. However there can be no compromise when a Malaysian IC, and consequentially citizenship, is obtained through dubious means. The holder of such document was never a Malaysian citizen in the first place.

If the ICs in Sabah are all recalled and replaced upon verification, this very act will answer all those criticisms faced by the Election Commission on the contamination of the voters list.  Those who have obtained citizenship on the sly and become voters can be struck off the list immediately.

I would like special focus to be given to the IC numbers shown under Category P1, P2 and P3 as shown in Appendix  9.  If identity cards have been issued under these block of numbers, there are 257,026 to be verified immediately.

What do we do with them? They can be given documentation to reflect their situation and perhaps they can be distributed to all the states of Malaysia.

We also propose that new applications for citizenship must undergo a rigorous transparent process before they are approved, perhaps similar to the Banns  of Marriage. A website could be set up for people to comment on applications and all approvals entered into a Register of Citizens  which can be made available to the public.

We propose new laws on treason to ensure that Malaysians who have given or sold Malaysian documentations be held accountable and punished severely for the seriousness of their crimes. This could also be achieved probably by amendments to existing laws.

Likewise, employers who provide jobs to illegals be held accountable and so too other Malaysians who rent houses or land to illegals.

The UPKO Initiative in many instances extends beyond the perimeters of the terms of reference of the RCI. It provides insights into many areas we had little or no understanding of before. We have now concrete data when in the past it was mere speculation. We now know that the extent, size and reach of the economics of IC and birth certificates buying in the state of Sabah. At the same time, the family structures and ethnic affiliations are a source not only for increasing numbers of illegals entering Sabah but the quantum of their entry would certainly if unchecked result in the “real” Sabahans becoming a minority in this country.

As a Party that has long articulated for the formation of the RCI, it is our hope that the Report coming out of this Commission will put to rest this issue once and for all.

We wish the Commission success.