THANK YOU FOR TAKING CARE OF SABAH 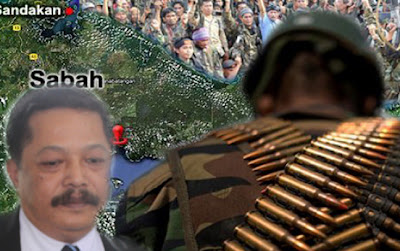 KOTA KINABALU:  Senior Assistant Commissioner (SAC) Zulkifli Abd Aziz, 53, met up with terrorist chief Abgimuddin Kiram three times while the crown prince was holed up in Tanduo, each time to get the self-proclaimed Sulu chieftain to leave the State.

He said each time he offered Abgimuddin to leave without bloodshed, he was told that as a civilian, he (Zulkifli) had no authority to give him (Abgimuddin) any instructions.

Abgimuddin said he would only listen to his elder brothers, Datu Jamalul Kiram and Datu Ismail Kiram, and if they directed him to leave, then only would he leave Sabah.

Hassan is accused of withholding information with regards to the intrusion of Tanduo by Abgimuddin and a band of heavily armed terrorists in February this year.

The offence carries a maximum jail of seven years or a fine, or both, upon conviction.

On Tuesday, the second day of the trial, Zulkifli told High Court Judge Ravinthran N. Paramaguru that he met Agbimuddin three times at a house in Tanduo, and each time he told the Sulu intruder that he had violated Malaysian sovereignty.

The first meeting was on Feb 14, 2013 at 2pm, when Zulkifli together with two other SB personnel, ASP Zulhani Borhan and Corporal Salsagap went to meet Agbimuddin.

Testifying during an examination-in-chief by DPP Dato’ Nordin Hassan, Zulkifli said that at the first meeting he told Agbimuddin that his action to intrude into Kampung Tanduo with his followers was against the Malaysia laws.

“After I explained to Agbimuddin, he thanked to me for taking care of Sabah for the past 50 years and said now it is his turn to take care of Sabah,” said Zulkifli who was then deputy chief of Sabah special branch.

Zulkifli, who is now the ESSCOM Intelligence chief of staff, also recalled that during the first meeting Agbimuddin gave him five documents, which were tendered to the court and marked as exhibits.

“After he gave me the documents, Agbimuddin also said that he would not leave Kampung Tanduo until his elder brothers told him to do so, as I as a civilian had no authority to give him any instructions,” he said.

To another question by Nordin, Zulkifli testified that during their second meeting on Feb 15, 2013, at 11am, he together with Datuk Rashid, ASP Noraidin, Inspector Yusri and corporal Salsagap, Zulkifli again advised Agbimuddin and his followers to leave Sabah.

“His response was the same and he said the same thing that he is a prince and only his brothers have the authority to tell him to leave Sabah,” he recalled, adding that several documents were also given to Zulkifli during that meeting.

At the third meeting he said, they again failed to persuade Agbimuddin to leave Sabah immediately before any bloodshed happened and Agbimuddin replied that for them to die is just an ordinary thing as Sabah belong to the Sultanate of Sulu.

Zulkifli also trstified that while in Tanduo he noticed there was tight security put up by the gunmen of the Royal Sulu Force (RSF) who wore camouflage uniform, and were armed with various weapons like M16, M14, Garran, Carbine, pistol and machetes. (BI)
Posted by sabahkini.net at 14:41