SABAH GOVT IN A QUANDRY OVER NATIVE ISSUE 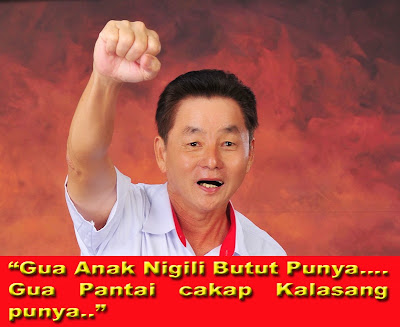 IMPLICATIONS..... It Must be handled delicately as any wrong interpretation would create complications and unnecessary implications in the future, says minister.

KOTA KINABALU: The Sabah government is caught in a quandary over the ‘native’ status issue and is in no rush to resolve thousands of cases where non-natives have allegedly managed to secure Native Certificates (NCs)

Local Government and Housing Minister Hajiji Mohd Noor said the government is looking into the matter seriously and would not simply rush to specify who can claim to be a Sabah ‘native’.

Describing it as an extremely delicate-and-sensitive issue, Hajiji said that any wrong interpretation would only lead to complications and unnecessary implications in the future.

“We cannot rush this… it is a sensitive issue and cannot be solved fast,” he said in response to a question from Kapayan assemblyman Edwin Bosi on the issue.

He cited the case of Sarawak where the definition of native is both parents must be natives for their children to be accorded native status, and in instances where one parent is not a native, then the native status cannot be applied.

“As for Sabah, if one of the parents is a native and the other is a non-native, the native status still applies.

“But the problem arises when their children marry a non-native. The percentage of natives of their offsprings will be reduced to 25%. So how do we define the status?” he asked.

Hajiji thus said this is the reason why the state government must be careful in defining the term ‘native’.

“We want to avoid implications on the future generation, especially on the division of properties.

“We will deal with the matter on a case-by-case basis, and I would like to give the state government’s assurance that the natives’ interest in Sabah will be protected,” said Hajiji.

Compounding the state government’s headache are daily disclosures in the on-going Royal Commission of Inquiry (RCI) on the illegal immigrant problem in Sabah.

Witnesses and immigrants have revealed to the RCI how they came by their citizenship and even gained Bumiputra status and all the perks, punching more holes in the definition of ‘Sabah native’.

Some of them, the inquiry heard, now hold influential positions in Umno, the main party in the ruling Barisan Nasional coalition government.

Meanwhile, on a related issue, Hajiji told the House that the state government’s decision to revoke the native certificate of Kota Kinabalu MP Jimmy Wong remains.

“The decision has been forwarded to the Kota Kinabalu Native Court for declaration under Section 3(3), Interpretation (Definition of Native) Ordinance (Sabah Cap. 64),” he said.

On a question from Sekong assemblyman Samsuddin Yahya on what action would be taken against Wong for purchasing properties using his ‘native certificate’, Hajiji said the matter would be left to the relevant authorities to handle.

On July 6, 2012, Wong who was then the Sri Tanjung state representative filed a RM150 million suit against the state government and several of its agencies for defamation, in regards to statements made by them over his native status.

Wong, 63, who is also DAP Sabah chief is seeking RM100 million in damages from the first and second defendant and another RM50 million or damages to be assessed by the court as well as punitive damages against all the defendants for unconstitutional actions.

He also wants the policy introduced and enforced in 1982 to stop the issuance of native certificates in Sabah, to be declared null and void.

Wong, in his statement of claim, singled out Osman Jamal for telling the press that the cancellation of his native status would “ensure a further tightening of the process and make holders of dubious NCs (Native Certificates) think twice before going ahead with their plans”.

The director was also quoted as saying that perhaps the transfer of some native land to Wong was done before the committee was set up.

Wong had bought the land using his NC which was recently declared invalid by the state government.

Osman also said his department was awaiting instructions from the Ministry of Local Government and Housing, the State Native Affairs Council which recommended the cancellation in order to reclaim the land.