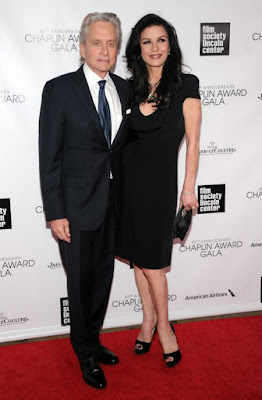 Michael's spokesman Allen Burry said the 68-year-old actor—who stars in the just-released biopic of Liberace, Behind The Candelabra—had discussed the link between oral cancers and oral sex, among other risk factors, but wasn't referring to his own specific case.

In the audio clip, however, it's obvious that Douglas does say his cancer wasn't a result of hard drinking and heavy smoking, but was instead caused by the human papillomavirus (HPV).

Burry insists that Douglas was talking in general, not personal terms. "This is not the cause of his cancer," he reiterates.

"The Guardian firmly denies this charge of misrepresentation,” the paper notes online. "Mr Burry was not present at the (interview); the only two people present were Mr Douglas and The Guardian writer, Xan Brooks."

Burry adds that he hadn't sought a correction from The Guardian. "I'm not asking The Guardian to do anything, I think they did enough already," he says.

Douglas, star of the now-classic thriller Fatal Attraction, revealed in 2010 that he was battling with stage-four cancer, but he beat the disease thanks to a gruelling regime of chemotherapy and radiotherapy.

"I have to check in regularly—now it's every six months—but I'm more than two years clear," he told The Guardian. "And with this kind of cancer, 95% of the time it doesn't come back."

Michael has been applauded by health experts for speaking out about link between throat cancer and oral sex. Brian Hill, executive director of America's Oral Cancer Foundation, praised him to The New York Post, saying, "I'm really quite proud of Michael saying this. This is not an aberrant sexual behaviour. But the willingness to talk about this openly can be difficult."