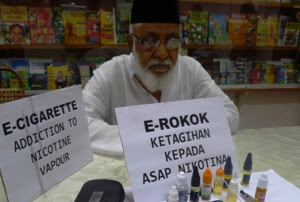 GEORGE TOWN: The Consumers Association of Penang (CAP) wants the government to ban e-cigarettes immediately because more students, youths and women are becoming addicted to the nicotine vapour.

Its president, SM Mohamed Idris, said this was revealed in a CAP survey with a retailer recently.

He said while there was an age restriction for the sale of cigarettes, there was none for e-cigarettes.

“This can lead to more children and youths smoking e-cigarettes,” he added.

He pointed out that most e-cigarette sales were done online, hence within easy reach of minors.

Idris said a teacher told CAP recently that about 60 students in his school smoke e-cigarettes.

“CAP wants the Health Ministry to impose an immediate ban on the promotion, sale and use of e-cigarettes,” Idris told a press conference at his office here today.

E-cigarettes do not contain tobacco but are battery-operated devices using a nicotine-filled cartridge that contains mint, vanilla, cherry, coffee bean and other flavourings.

The devices also come in flavours that children like such as chocolate, strawberry and caramel.

Idris said it was ironic that some websites were promoting e-cigarettes as a way to kick the smoking habit.

E-cigarettes are sold between RM50 and RM90 each while a nicotine bottle cost RM10 to RM20.

Idris said the World Health Organisation (WHO) did not consider e-cigarettes to be therapy for smokers trying to kick the habit.

He said according to scientists from the University of Athens, Greece, e-cigarettes caused lung damage.

He cautioned that nicotine on its own was a toxin similar to pesticides.

“When taken too much, it can lead to nicotine-poisoning, which causes vomiting and nausea and headache,” Idris said.

A small study presented at the European Respiratory Society’s annual meeting in February 2012 showed that e-cigarettes could affect people with coronary artery disease because it lowers the blood oxygen level after 10 minutes of smoking.

In May 2009, The US Food and Drug Administration (USFDA) tested 19 varieties of electronic cigarette cartridges and detected cancer causing agents in them.

An average 50 teenagers below the age of 18 start smoking in Malaysia every day. (FMT)
Posted by sabahkini.net at 06:29