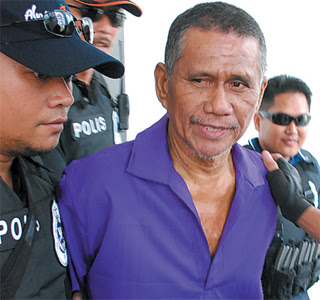 KOTA KINABALU : The High Court trial of a police corporal charged with intentionally omitting any information related to terrorist acts was told, Monday, that 1,500 of so-called Sulu Sultan (Jamalul) Ismail Kiram's people were gathering at Simunul island in the Philippines with the aim of entering and claiming Sabah.

The prosecution's first witness who was testifying under protection from an undisclosed location within the courthouse building said this on the first day of the trial of Detective Corporal Hassan Hj Ali Basari.

Judge Ravinthran Paramaguru was told that the witness met Hassan at 10am at an ice-cream shop in Lahad Datu in January, this year, and told him about an incident in Bongao, Philippines.

Asked by Deputy Public Prosecutor (DPP) Dato' Nordin Hassan during examination-in-chief on what the incident was, the witness said Ismail Kiram's people were gathering at Simunul island near Bongao.

At that time the witness was selling fish from a "tempel" boat at Bongao when a group of men clad in orange-striped clothes with the words "Royal Sulu Force" approached the boat asking if it was going to Simunul.

The witness said he overheard the men conversing in Suluk that 1,500 people were gathering at Simunul island to come to Sabah and claim the State.

The witness said three days after meeting Hassan in Lahad Datu, the latter contacted Hassan through telephone and informed him that there were four "tempel" (boats) coming in to Bangkuan, Lahad Datu.

The court was told that the witness saw Hassan, whom the latter knew for 10 years, borrow a pen from the ice-cream shop and write down the information. The witness reminded Hassan not to ignore the matter and to inform the superior.

Hassan, 58, is accused of intentionally omitting to give any information relating to terrorist acts between January this year and March 3 in the office of the Special Branch chief at the Lahad Datu police headquarters.

The charge under Section 130M of the Penal Code carries a jail term of up to seven years or fine or both on conviction.

The court also heard that a Special Branch officer, one Yusri, who went on duty to the Philippines, had informed the witness to report any information to Hassan.

During cross-examination by one of Hassan's counsel, Ram Singh, the witness told the court that Yusri instructed the latter before he (Yusri) left for Zamboanga, Philippines, to report to Hassan any information while he was not around.

To a question, the witness agreed with Ram that the witness ought to tell the officers from Special Branch about the national's security.

To another question that the witness had informed about national security to Yusri and one Insp. Shazwan and therefore was making Hassan a scapegoat, the witness replied: "That depends on you."

To a suggestion that the witness did inform Yusri and one Insp. Shazwan about national security, the witness agreed.

However, the witness disagreed with Ram when the counsel suggested that the witness met Hassan once to inform him that "illegal immigrants would be coming".

When asked during re-examinion by DPP Dato' Nordin on whether the witness gave the information regarding the 20 men and 1,500 people gathered at Simunu the witness replied that at that time, Yusri was not around and that he did the witness to report to Hassan when he (Yusri) was not around.

The court also heard that the witness did not directly inform Insp. Shazwan. Earlier, Dato' Nordin in the opening address told the court that the prosecution would present oral and documentary evidence to show that on the dates stated in the charge, Hassan, who was a Special Branch officer assigned to the Lahad Datu District police headquarters, had information that a terrorist act will be committed relating to the intrusion by the Royal Sulu Forces into Kg Tanduo, Lahad Datu.

The prosecution would also present evidence to show that Hassan intentionally omitted informing and reporting the information relating to the said terrorist for any of his superior officers in the Special Branch which he was legally bound to do so.

The prosecution will also present evidence to show that Hassan had a good relationship with the Sulu Sultanate and that Hassan had on several occasions been in contact with Datu Agbimuddin Kiram, the leader of the Royal Sulu Force which intruded into Kg Tanduo, Lahad Datu, which resulted in the death and injury to members of the Malaysain securty foreces, said Nordin.