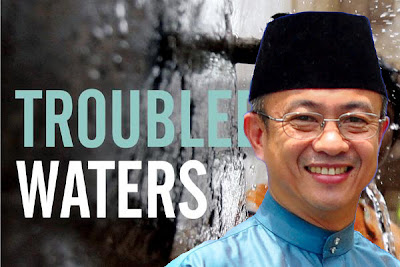 LABUAN : The Ministry of Energy, Green Technology and Water should determine whether the Water Department here had 'erred' by failing to have reserve water pumps in working condition at the Beaufort station.

Such spares could be used immediately to replace faulty parts and averted Labuan plunging into a water crisis.

Member of Parliament, Rosman Datuk Isli said this in response to a question on whether there were elements of negligence that had resulted in the many parts of the island going without water since last week.

"I am concerned over the negative impact of the water shortage and the misery it was causing consumers, including industries and business establishments.

"But I am happy that the department viewed the problem seriously and swiftly responded to alleviate the situation. Two specialists have arrived to look at the Beaufort station problem.

He said the Water Department, including Fire and Rescue Services Department, had deplyed several water tankers, including hiring from private companies, to deliver water to town areas and critically affected zones.

He hope the problem would be solved soon and not till the end of the month as told by the department. "The sooner the better because we are having the Borneo Art Festival and other events this month."

Rosman also ticked off the department for depending only on a radio station to warn the public of the water shortage as many caught unaware and could not stock up supplies.

The grim water situation had been prevailling for days leading to boiling tempers in the hot present temperature. Not only comsumers were affected but restaurants, food stalls, clinics, industries and establishments like hotels.

Many had not expected such a crisis in Labuan, particularly with the completion of the RM365 million second sub-sea pipeline to deliver water from Padas river.

Water was also available from the four local reservoirs at Sg, Pagar, Kerupang, Merinding and Bukit Kuda as well as the tube wells.

The total available was about 92 MLD while the consumption was about 50MLD. Therefore there is excess water and suficient supplies till 2020.

This is not the first time that Labuan has been hit by waters problems.

A more serious one occurred and last for about a a year before the second water pipeline was completed.

The UMS-Labuan International Campus staged a rare protest over the problem.
Posted by sabahkini.net at 13:31