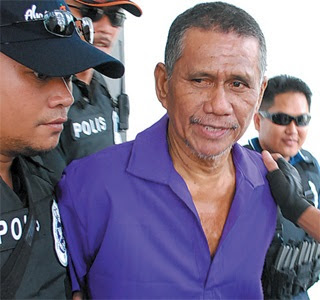 The prosecution's protected witness Number Two, who was testifying under protection from an undisclosed location within the courthouse building, told Justice Ravinthran Paramaguru that he/she listened to the communication upon being instructed by the superior.

The witness, an administrative assistant at Special Branch in Bukit Aman police headquarters in Kuala Lumpur, told the court that his/her duty was to process the information and do a translation, if needed, as he/she was fluent in Suluk, Bajau and Malay.

Asked by Deputy Public Prosecutor (DPP) Dato' Nordin Hassan during examination-in-chief, the witness said three interceptions were made on Feb. 25, March 2 and March 3, 2003.

Referring to a document dated Feb 25, the witness said the conversation was between Datu Amir Bahar and Raja Datu Agbimuddin in Suluk at 10.31pm whereby Amir, who made the call, informed Raja he had been tipped off by Hassan that the Malaysian government would be coming at 12.30am, to which Raja replied they would be ready.

Datu Amir also said that Hassan and Husin were brothers and like their own family. The witness said by monitoring daily, he/she could identify their voices.

The witness testified further that he/she heard a conversation between a "Lelaki Sabah" (Sabahan man or LS) and Hassan at 7.37pm on March 2, whereby LS asked "How" to which Hassan replied "standby".

The former then asked whether its already war, to which the latter replied "yes, yesterday".

The witness also heard that Hassan asked LS whether he had contacted Philippines and LS said "Yes, more than 400 people will be coming to Sabah from Bongao to assist". To a question by Hassan on whether they comprised MNLF soldiers, LS said "already mixed with Sultan".

The witness further testified that the third interception was at 9.28am on March 2013 made by LS to Hassan where LS told Hassan that from the information he obtained from the internet, the number of the intruders, who will be coming, is hitting thousand and needed more financial support.

Hassan agreed saying USA was among them with support also from Nur Misuari (ex-MNLF leader).

Other conversations between them were that Ismail Kiram wanted to claim their right over Sabah and that if the Malaysia Government did not obey their wishes, they will create chaos in Sabah.

Hassan told LS it was said that Ismail was going to send people to enter Sabah and use guerilla tactics as stated by Misuari earlier.

On trial is Detective Corporal Hassan Hj Ali Basari , 58, who is accused of intentionally omitting to give any information relating to terrorist acts, between January this year and March 3 in the office of the Special Branch chief at the Lahad Datu Police Headquarters.

The charge, under Section 130M of the Penal Code carries a jail term of up to seven years or fine or both on conviction.

The prosecution's third witness, Mohd Ali Asmali, 39, an auxiliary police at Felda Sabahat 20, Kg Embara Budi Lahad Datu, told the court he and another friend went fishing in a boat at Tanduo waters at 7pm on Feb. 11, 2013.

While fishing at about 2am on Feb. 12, they heard a boat and could tell from the engine sound that the boat was big. The boat was heading to Tanduo beach.

"After that we heard, the boat speeding to the high sea.

We finished fishing at about 6.40am and returned to the beach.

On our way, I saw 100 people gathered at the surau area.

Our distance from the surau was about 100 metres.

"We saw people clad in camouflage fatigues with some wearing red bands on their heads and arms. Some also wore white songkok," said Mohd Ali, adding the men were not the Malaysian army.

"I was amazed and scared. We decided not to land at the place where the people gathered but headed to the rivermouth about 30-40 meters away," said Mohd Ali, adding they then went to Cendrawasih police station to report the matter the same day.

When cross-examined by one of Hassan's counsel Ram Singh, Mohd Ali said they went to the police station at 8.20am and reported the matter to the station superior, Nazri.

Heowever, he only managed to lodge the report at 4.13pm as he had to wait for the Lahad Datu OCPD, who wanted to hear the information personally.