USA IN CAHOOTS WITH SULU TERRORISTS? 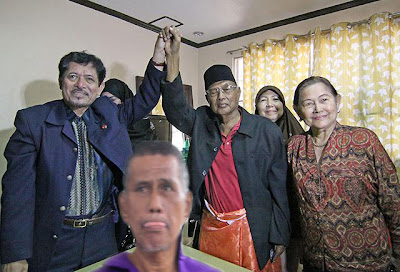 USA?.....Intercepted telephone conversation indicates Hassan had said the intruders were supported by the United States of America and the former leader of the Moro National Liberation Front (MNLF), Nur Misuari.

KOTA KINABALU: The High Court here was told today that the voice in two intercepted telephone conversation was identified as that of the policeman on trial for an offence in connection with the Sulu terrorist intrusion in the east coast of Sabah.

A witness, who is under protection, said he identified Detective Corporal Hassan Ali Basari’s voice in the intercepted communication, during which the accused identified himself.

Hassan, 55, from Semporna, was charged with voluntarily withholding information on terrorism activities at the office of the Special Branch chief, Lahad Datu Police Headquarters, between January and March 3 this year.

The charge, under Section 130M of the Penal Code, carries a jail term of up to seven years or a fine or both upon conviction.

According to the witness, on March 2 this year, a Sabah man contacted Hassan at 7.37pm to ask whether a war had started and Hassan confirmed it.

The witness said based on the telephone conversation, which was translated, the Sabah man said he had contacted the Philippines and was informed that more than 400 people would enter Sabah through Bongao, in the Philippines.

In the intercepted telephone conversation on March 3, the Sabah man contacted Hassan again at 9.28am to inform on information he obtained from the Internet, stating that the intruders would come in thousands and require huge funds, he added.
Hassan being led out of Court. He is charged with withholding crucial information on terrorism activities.

Hassan being led out of Court. He is charged with withholding crucial information on terrorism activities.

The witness said Hassan told the Sabah man that the intruders were supported by the United States of America and the former leader of the Moro National Liberation Front (MNLF), Nur Misuari.

Former Sabah police special branch deputy chief, SACP Zulkifli Abd Aziz, who is now with the Eastern Sabah Security Command (Esscom), told the court that the information in the intercepted telephone conversation between the accused and the Sabah man was crucial for the country’s security.

He said that when he was the Sabah police special branch deputy chief, Hassan was also involved in intelligence operations on threats by the Sulu terrorists in Lahad Datu.

Zulkifli said the accused was selected for the job because he was conversant in Bajau and Suluk and had many friends from the two ethnic groups in Lahad Datu.

However, he denied having received any information on the threats by the Sulu terrorists or terrorist activities in Kampung Tanduo, Lahad Datu, from the accused.

He said information on any threats against the country’s security obtained by the Special Branch policemen at the district level had to be reported immediately to the District Special Branch head.

The accused is represented by lawyers Kamarudin Mohamad Chinki and Ram Singh, while Datuk Nordin Hassan led the prosecution.

Also present were the accused’s wife and two children.

The trial before Justice P. Ravinthran continues today. (BI)
Posted by sabahkini.net at 10:53