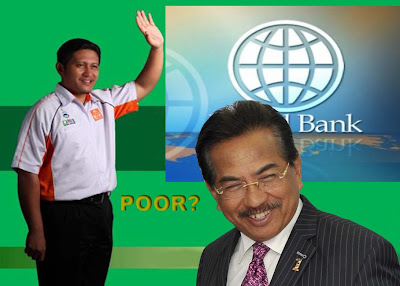 KOTA KINABALU: “Even with political stability and conducive economic environment, Sabah cannot attract more home and foreign investors as long as the chocking Cabotage Policy is still in place and enforced” says Lahirul Latigu, Ketua Pemuda PAS Sabah responding to the closing speech by Datuk Musa Haji Aman, the Chief Minister of Sabah at the Dewan Undangan Negeri Sabah on the 20th June 2013.

Responding to the recent state budget 2013 which the Chief Minister claimed as the biggest in the history of Sabah, Lahirul explained that this claim was made by a person who does not understand basic economics.  For the last 30 years the ringgit has fell in terms of value.

The RM4 billion today is perhaps only half of the value in 1980, the public can see for themselves how much a RM100 can buy today compared to 1980 which means Sabah has bigger budget in 1980 compared to today.  For a successful businessman, the Chief Minister is claiming nonsense.

It is very sad for Sabah to have a Chief Minister and a Finance Minister who cannot differentiate between obligation of the Federal government to provide for Capitation Grants as in Article 112d of the Federal Constitution and the income stream to improve the welfare of the people in Sabah.

The Chief Minister can claim whatever he like, the fact remains that the World Bank Report says Sabah has the highest poor people in Malaysia.

Even right now this issue is being discussed by the Royal Commission of Inquiry on immigrants.  Has the Chief Minister overlooked these important issues?

It appears that the Chief Minister’s oversight is not only restricted to the use of facilities for Sabahans but also include other income generating issue for the benefit of the rakyat.

The income figures that the Chief Minister derived from Federal Agencies in Sabah is misleading.  The figures from the IRB for example did not take into account taxes payable by large plantation in Sabah, these figures also did not include import tax on petroleum products to Sabah and export tax of crude petroleum from Sabah.

These are income for Sabah, the question is where are these income?

As one of the plaintiff to sue PETRONAS as well as the State Government, Lahirul says “As the Chief Minister of Sabah, Datuk Musa Haji Aman is fully aware of Schedule 9 of the Federal Constitution that Land is a State Matter.

The PETRONAS signed on June 14, 1976 is right now under dispute.  Part of the dispute arises from the fact that the Federal government in 1975 gave away land belonging to Sabah to PETRONAS. Therefore we would like to ask the Chief Minister, who gave Tun Razak the right to give Sabah land to PETRONAS in 1975?”

Lahirul asserts that it is one thing to have friendly relationship with the Federal government, it is another thing when things that should accrue to the state government is compromises.

Discussion cannot be initiated and decided solely based on friendly relationship between the state government and the Federal government.  The fact that Musa Haji Aman is also an active UMNO member many things can be compromised.