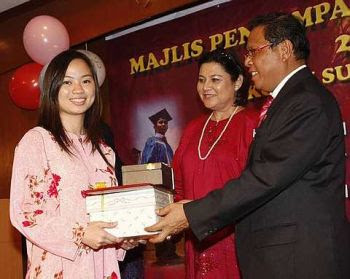 Jame who officiated the Majlis Anugerah Perkhidmatan Cemerlang at Wisma Muis, here shed some light on the trend of teachers promoting items on Facebook as a part time business.

"One of the very popular ones is direct selling posted and promoted via Facebook," he said during a press conference after the event.

"This can lead to disciplinary action, said Jame who emphasised that severe punishment can be taken against someone who is in the teaching profession.

Not only can it interfere with their teaching schedule, it can also deviate from their original purpose as a teacher.

"Imagine potential clients calling a teacher during class, meetings and when they are busy preparing for their classes inside the office."

Although no serious cases were reported, warnings will be given to teachers who are caught with supporting evidence, he said, adding this will be followed by disciplinary action if the warning falls on deaf ears.

Jame saw no reason as to why this should happen as teachers' salaries have been increased and upgraded. The schemes and scales are far better now.

In this respect, he advised teachers to be thankful for what they have.

"It's not proper for a teacher to do part time business. Think about it, their conversations would be more about business instead of academic. We don't want this.

"Do not let greed take over you. I believe one of the reasons for this is due to greed and not being satisfied with what we have. (e.g. wanting a new, bigger and more branded vehicle)."

Meanwhile, those who are still keen on pursuing a business to put more money in their pockets were reminded that consent is needed from the department beforehand.

However, those with a good salary, should rethink it as it could tarnish their image as a teacher.

In relation to this, he said that the important part is the outcome.

"And the role of a teacher is to meet the target of an excellent outcome, so that when we educate 100 students, we can be sure our expectations come to fruition."

The Anugerah Perkhidmatan Cemerlang was awarded to about 201 individuals among them school principals, excellent teachers and officers.

In his speech at the event, he said that although there are negative accusations regarding the State's education level, he is optimistic and confident that it can be improved.

"Hopefully, the awards being handed over today can serve as an inspiration to all and encourage all to work harder. Double your efforts and commitment."

"Do not feel and announce that you are the best because those who are the best will not speak of their excellence in public or announce it."

They will be too busy learning and working than speaking of their success. These kind of people will draw many good people to them.

These kinds of people are indeed an asset to an organisation, he added.

"Work hard sincerely without hoping for more money or reward.

But for sure, you will receive it one day."

"Due to the fact that schools and basically, education belongs to society and at the same time, involves them, their needs must be taken into account and fulfilled through an effective delivery system in line with the slogan, "merakyatkan sekolah atau memasyarakatkan sekolah".

On Malay and English, he said strengthening of these two subjects and the ability to speak both languages can be achieved. (MKINI)
Posted by sabahkini.net at 17:40