CYBER TROOPERS IN EVERY MINISTRY SOON 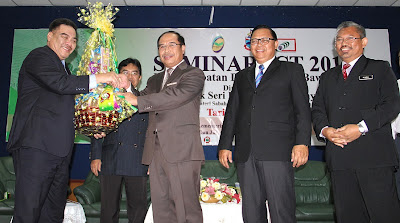 “It is also important for officers responsible, namely the Chief Information officer and ICT security officer, to help the government in ensuring others follow the guidelines,” he said in his speech at the opening of MAFI’s ICT seminar at Wisma Pertanian here on Wednesday.

Yahya also urged the formation of cyber troopers in every ministry to be expedited. This was recommended apparently by Prime Minister Datuk Seri Mohd Najib Razak.

“These groups will be responsible in responding to irresponsible individuals’ comments on social network which are meant to badmouth government’s administration system.

“Our cyber troopers also have to provide the facts and truth for the public,” he added.

The minister also urged civil servants to make use of the technology to improve their competency as well as to deliver efficient service for the people.

“The globalisation phenomenon which is driven by ICT is replacing the typewriter, telegram and newspapers which used to be the main tools in administrative works.

“But now, the key to success management is much dependent on mind-challenging mastery on information and ICT,” said Yahya.

At present, almost all government staff from managerial to low level rank posts are involved in the digitalised form of government system.

The state government is among the earliest to implement E-government system in year of 2000 that manage the human resources matter and leave application on online basis.  Later on, civil servants are also encouraged to use government-link email to improve interaction among staff.

He also commended E-government system was a good idea that would direct the government towards sustainable environment via the IT-Green concept.

“ICT enables us to prevent from using paper unnecessary and thus cut budget on related stationary for the printing,” he elaborated.

Yahya also reminded seminar attendees that internet could also be harmful when it was used for wrong purposes at wrong timing.

“ICT development includes the invention of several social platforms such as Facebook, Twitter and blog which would also create negative implication.

“Among the bad impacts including staff wasting their time on internet for non-work related which should not be happened,” he added. (BI)
Posted by sabahkini.net at 14:45