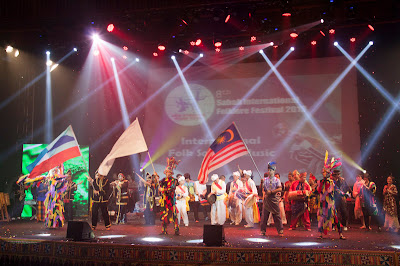 CULTURAL enthusiasts had the rare opportunity to experience an ensemble of local and global folk songs and music at the Sabah International Folk Song and Music concert held in JKKN (National Department for Cultures and Art) Auditorium last night.

“The Sabah Cultural Board (SCB) is evaluating the concert to see if it is feasible to include it in the international folk festival next year,” said Tourism, Culture and Environmental Minister Datuk Masidi Manjun.

“But I’m very satisfied with the trial run,” he added. The minister’s approval probably meant that the group’s creation would likely make the grade as one of Sabah’s items in the SIFF the following year.

Six musicians and groups from across Sabah joined five other troupes from Sarawak and Kuala Lumpur to represent  Malaysia in the Festival. Sri Lanka, South Korea and Japan also sent their representatives, many of whom are recognised internationally.

The evening started with the musical acoustics of bamboo instruments by the Kinabalu Merdu Sound Group from Ranau, Sabah. They were joined by saxophonist Philipus Jani, the self-taught and innovative musician from Tambunan who crafted his own musical instrument out of bamboo.

From the Indian Sub-continent came the Ranranga Dance Academy of Sri Lanka who delighted the audience with the Sri Lankan Harvesting song and dance. Japanese Quena player Rie Mikami, synthesizer composer Arie Tomita and choreographer/dancer Terumicih Matubayashi who were originally invited to perform at this year’s Sabah Folk Art Exhibition were the last overseas group to perform and were hugely applauded by a very appreciative audience.

But the tumultous cheers and applause from the audience clearly showed who they thought were the best performers. It was Tuku Kame, Sarawak’s award winning band.

They combined traditional Sarawakian musical instruments like Sape (Borneon guitar) and Ketebong (Iban drum) to produce a music that is at once folksy and modern – and the best performance of the night. Tuku Kame bagged eight gold medals and made ‘Champion of the World’ for the group category at 2011’s Performing Arts 12th World Championship held in America.

“I personally feel very happy and thrilled to see traditional instruments like Sape used to modernize folk songs, creating a new genre that can be accepted and enjoyed by everyone in the society. And such creativity can also be adapted by musicians in Sabah,” said Masidi.

Turning to the Sabah International Folklore Festival, Masidi said that  SIFF has become a much anticipated annual event, and one that broadens the mind as it exposes the people of Sabah to the music and dance and folk culture of neighbouring states and other countries. (Insight Sabah)
Posted by sabahkini.net at 11:07