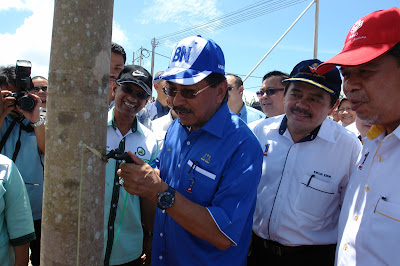 KOTA KINABALU: Matunggong Assemblyman Jelani Hamdan denied that he retracted his statement at the State Legislative Assembly sitting last Wednesday regarding the prevalent poverty and backwardness in his constituency.

He also said that he would furnish the proof as challenged by Chief Minister Datuk Seri Musa Aman on recipient names on government aid schemes such as the 1Malaysia notebook and lot in longhouses and to present it in the next assembly sitting.

He said he fully supports the statement by Prime Minister Datuk Seri Najib Tun Razak that Rungus ethnic group is backward as of lacking in infrastructure and economically poor.

Jelani (photo) however clarified that what he was asked to retract was the word ‘Cabinet crony’.

He said that Cabinet member and BN assemblymen who repeatedly pushed him to retract his statement deemed such term was non-parliamentary.

“But my words were that if they understood it that way, I will retract. But I didn’t retract my statement on poverty and backwardness in my constituency.

“The only word that I retracted was Cabinet crony,” he said.

Jelani was adamant that what he had said about poverty was true and that even the World Bank supported this, as proven in its reports.

“The Chief Minister asked me for the proof and I will do that in the next assembly sitting,” said the former Umno division chief now a PKR lawmaker.

Jelani thanked Musa for clarifying that the government will not be side-lining constituencies that are under the opposition.

Musa on Wednesday said that no constituency, including those under the opposition in Sabah, will be deprived of development.

Jelani said he could also provide proof of people having their names de-listed as recipients of the 1Malaysia notebooks for purportedly supporting the opposition.

He also claimed that many leaders including people who don’t deserve the aid from Sabah Rubber Industry Board (LIGS) have taken advantage or abused their position to obtain the aid. (BI)
Posted by sabahkini.net at 23:34