LAHAD DATU ABDUCTION COULD BE FAKE? 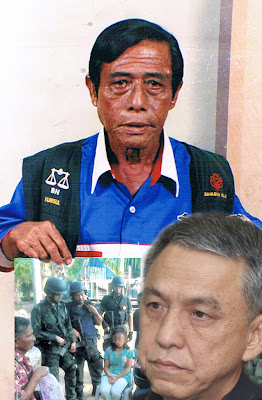 KOTA KINABALU: Police are still highly skeptical of a report lodged by a 14-year-old girl who claimed that she was taken from her house in Kampung Tanagian, Lahad Datu, to a plantation where she was confronted by 12 men who were dressed in black early this month.

“Police believe the girl might have made up the story as investigation showed the girl had suffered from mental illness.

“We will therefore refer her for psychiatric observation,” he said, when asked to comment on the status of police investigation into the case.

On June 17, a woman lodged a police report alleging that her 14-year-old niece was taken from a house in Kampung Tanagian to a plantation where she was confronted by 12 men dressed in black.

According to the report lodged at the Lahad Datu Police Sstation, the woman claimed that her niece had informed her that she was tied up after being brought to the plantation near her house at about 1.30 pm.

In the report, the girl claimed that the men, some armed, had asked her about the whereabouts of two individuals by the name of Bintor and Tasha.

The teenager reportedly told the men that she didn’t know and the men then left her there. She then returned to relate the incident to her aunt.

Sabah Police Commissioner, Datuk Hamza Taib, had said no traces of the men were found when police went to the plantation, and despite being skeptical about the report had indicated that the police would investigate the matter from every angle. (BP)
Posted by sabahkini.net at 11:20