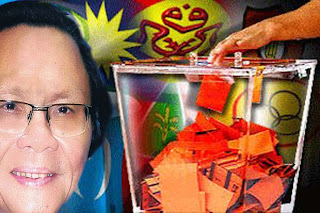 THE COOLING off period of 3 days is not necessary in our election process involving the state and national elections. This is a new ruling set up by the SPR (Election Commission) used in the past elections held.

Sabah DAP Vice chairman Edward Ewol Mujie said today that the measure to give the candidates a grace period of three days after being successfully accepted as a candidate to consider whether he should go on with the election campaign or to withdraw as a candidate without losing his deposit paid to the EC.

Edward said the move is totally unnecessary, and this is actually creating loop holes and opportunities for the candidates to abuse on the 3-days cooling period. The simple case is that various candidates may make use of this 3-day to negotiate for handsome withdrawal rewards, trading, threatening, bribes, and even sales and so on.

There is a lot of activities and action within these three days. The many fortune seekers will come and to be nominated in as candidates during election time. They are not genuine and wanted to be able to squeeze for some quick money.

We have seen many of such people around during the many past election held. With the 3-days cooling off period, this type of activities will be further encouraged. Once the person got what he asked for he will just pull out from the election.

There are some candidates who see no chance to win the election will want to withdraw after the nomination process and after knowing the other contesters. This practice is not to be encouraged, because this will bring in more work for the EC too.

On the part of the EC, this 3-days cooling off period has created difficulties for them. They have to wait for the cooling period over before the printing of the ballot papers can be printed and distributed.

That means the EC had lost three good days in their polling day preparation work. This delay also created more work for the EC in striking out the names of the particular candidates who withdrew after the period and also includes the refund of the election deposit to them later.

Edward said there were no such cooling off period being practiced in the past and the elections were carried out without any hitches. Why bring in such headaches, problems and extra work load now? This did not help the EC in any way but only benefiting the people who are not sure whether they want to be elected or not. If one is not sure, better don’t come to be nominated.

Edward wants the EC to immediately abolish this unnecessary 3 days of cooling period to bring along a clean and fair election, and this will definitely bring along a swifter election process. Without this will also cut off the negotiated arrangement to spoil the votes, to split the votes and creating disturbances.

It is only the genuine candidates should come for the election. There should be no more cooling off type of grace period. All the people who are being nominated and accepted by the SPR cannot withdraw after nomination day, otherwise they will lose they deposits and never be allowed to contest anymore. The elections are not ‘child-play’, and it must be seen as a way of sincerity, true for the people and carried out with full expectancies.