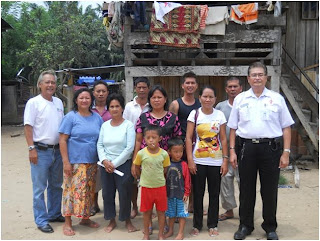 INHABITED….. A hardcore poor mother and children at Kampung Masolog, Melalap. There is no electricity and piped water supply at the village inhabited by local Murut.

DAP Sabah interior mobile service team visited the hardcore village folks at Kampung Masolog, Melalap, Tenom after they received complaints from the villagers that several local residents there were living in a state of poverty and deprived of the basic rural amenities like piped water and electricity supply that never reached the village for the past decades.

The hardcore poor families were majority murut without any assistance provided by the present Government.

They seek the assistance of DAP Sabah to apply for e-Kasih program in order to help uplift the standard of living of the hardcore poor at this particular isolated small village that existed for several decades. They complained that the Melalap Assemblyman had totally neglected their livelihood and they had never seen the YB visited their kampung for the past many decades.

The small Murut community survived on their own without any Government assistance, let alone getting piped water supply and electricity at the Kampung. The poor children could not afford to attend school and their hardcore poor parents had little money, depending on their small surroundings to plant some vegetables and fish at the nearby river for survival.

They appealed to the Government for PPRT as their poor conditions of dwellings were unsuitable, and the roofs leaked whenever there was rain. The entire families suffered in silence, and the under nourished children often got sick due to lack of proper nutritional food as they could not afford to buy food for their children.

The following photos taken at the hardcore poor family’s homes are evidence of the poor living conditions.

DAP Sabah urged the Melalap Assembleman to look into the plights of the hardcore poor families within his own State Constituency as the village folks there had been deprived of their rights as local natives to live in a decent life and denied of the basic means for their survival at this isolated village just a couple of Kilometres from Pekan Melalap, Tenom.

Dr Benjamin Yapp, who is also a Member of the World Affairs Council stated that if the State Government continued to neglect its poor rural people, he would seek the advice and assistance of the Union Nations on rural development and food security council, sustainable Human development, Humanitarian affairs, human rights as well as United Nations Children’s Fund (UNICEF) to offer humanitarian aid to alleviate poverty in the rural areas and interior of Sabah, Malaysia.