AH LONG IS THE KING? 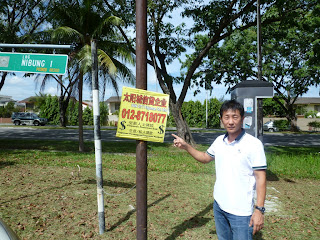 THE ILLEGAL Ah Long streamers and posters reappeared all over the KK City to as far as the kampongs. Why the DBKK, Putatan, Penampang District Councils did not noticed these banners hanging on trees, lamp poles and the road sign board poles? Are these Ah Long banners being given the permits and the authorities allowed them to display these to get people to borrow money from the ‘loan sharks’ openly?

The police is seen not closing one eye, but the people said the police are in fact closing both eye, “no eye see lah”! What is happening and why there is no action to take care all this in Sabah?

Sabah DAP Complaint Bureau In-charge Allem Chieng made the call today to urge the various authorities concern to immediately take action to put the situation of the illegal Loan Shark activities under control, if not by clearing the loan shark away from our society would be a good solution.

Allem Chieng is receiving many complaints from people who had suffered deeply because of being pressured by the Ah Longs to repay their loan with a sky-high interest rate which they cannot afford and will never be easy to settle. What is the use of the Money Lenders Act? The government is not doing anything to stop all these illegal dealing in money lending with very high interest rates, therefore the Money Lenders Act has become useless if there is no enforcement of the laws there are.

The Ah Long banners and streamers which are hanging all over the city and towns attracted the people who needed quick money to approach them for money. This is especially so during the festive seasons like Hari Raya and Chinese New Year, when the people needed some fast money to spend. The gamblers are the frequent customers of the Loan Shark too.

It is the duty of the councils and the DBKK to remove all this illegal banners from the housing estate, shops, and road sides, otherwise they are seen to be encouraging this type of illegal activity and we can also put up our own advertising banners and streamers without having to apply for the advertising permit and pay the fees required by the laws.

What is the use of the laws then, if the authorities are not going to act and exercise their power to see things right? The police had also received cases on people being pressured by the Ah Long, but what action has the police taken. Some cases happened many years ago have received no action and now the culprits are no way to be found, so the case closed.