‘SABAH GETTING RAW DEAL FROM PETRONAS’ 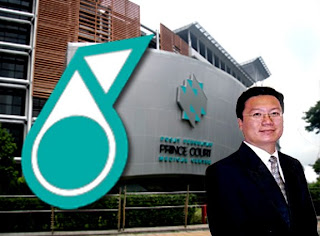 PETRONAS, which gets a major portion of their wealth from Sabah, was taken to task for spending on luxury projects such as the Sepang F1 racing circuit and a ’5-star’ hospital for the rich .

PKR Sabah secretary Dr Roland Chia said Petronas gets a major portion of its wealth from Sabah,but it is spending money millions on lavish peojects in the Peninsula while Sabah is right at the bottom in the country’s poverty index.

Chia said Petronas had neglected its corporate social responsibility (CSR) to Sabah and has instead indulged in unnecessary projects.

He said Petronas should be using its billions of ringgit following the oil price hike for more meaningful causes, rather than sponsoring sports cars to participate in the F1 Circuit, or continue to finance the accumulated losses incurred by the Prince Court Medical Centre (PCMC) in Kuala Lumpur.

Sabah, the largest gas producer and the fourth largest crude oil producer in the country, has been short – changed and many feel Petronas should do more for the state.

“I urge Petronas to channel their CSR funds for more meaningful causes rather than building a half-a-billion ringgit elite hospital in Kuala Lumpur and continuing to finance the Prince Court Medical Centre.

“The money can be used by sponsoring community buses for rural school children who needed to walk for 10-20 km to reach their schools in Sabah and Sarawak,” he said.

Critics have complained that Petronas spent RM544 million on PCMC and this contrasts with the RM47 million the company spent over the last 36 years from 1975 to 2011 on its Education Sponsorship Programme (PESP) in Sabah, which works out to RM1.3 million a year.

“This is utterly ridiculous. Sabahans are living in poverty, their overty index is among the highest in the country and Petronas under the BN government has got their priorities absolutely wrong.”

On losses incurred by PCMC, Chia noted that in its most recent annual financial report ended April 2010, the hospital, wholly owned by Petronas, suffered a net loss of RM451 million on the back of a RM82 million revenue.

According to records, the luxury healthcare facility had liabilities and current liabilities of RM749.4 million while its reserves were RM178.3 million.

The hospital which was launched in 2007, made a loss of RM203 million on revenue of RM24 million in 2009 to put its accumulated losses over the two years at RM654 million.

Confirming the construction cost during a question-and-answer session in Parliament, in 2008, Minister in the Prime Minister’s Department, Amirsham A Aziz, said the facility was established after the oil company had weighed its commercial returns and the access it provided Malaysians to world-class health services.

He said it was part of Petronas’ corporate social responsibility.

“What nonsense are they talking about?” asked Chia.

“I urge the Board of Directors to waste no time and start planning to build a charitable hospital in Sabah immediately,” he said.

He said that as directors on the board they are earning salaries in millions of ringgit and should resign.