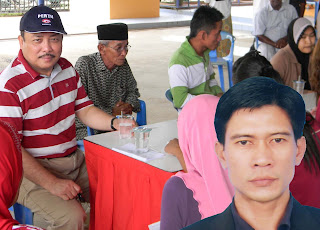 THE STATEMENT from the Minister of Local Government and Housing Datuk Hajiji Mohd Noor saying that the non payment of the monthly increment on the allowance of the Ketua Kampongs and Kapitan Cina in Sabah from RM450 to Rm800 were not made starting from January to August is due to some ‘technical problems’ waiting to be solved before the money can be released. In fact, it is not ‘technical problems’, but it is ‘financial problems’!

The Sabah DAP Kapayan Chief Stephen Jimbangan had recently in a statement query the Sabah state government on why this increment was not made, in spite Sarawak and Semananjung have paid their Ketua Kampongs and Kapitan Cina the increment according to the announcement made by the Prime Minister Najib last year.

Stephen said that the excuses merely reflecting that BN Sabah government is practically lying to the people of Sabah by explaining that this is due to a “technical problem”.

If there is a so called ‘technical problem’, why this problem took 8 months long and still no payment made? The BN is known to be very slow in solving simple problems let alone making payment on the allowance increment to the Ketua Kampongs. This also reflects that the poor efficiencies and effectiveness of the Sabah BN administration.

We cannot to have the BN continue to manage the Sabah administration, and the BN will further run us into deeper trouble and bigger financial hardship. This is shown by 42% of the country’s poor people are in Sabah. The hard core poor, people earning less than RM700 per month is even more in Sabah. The BN made plenty of promises and how many of this had actually materialized.

Stephen said the Sabah BN government must immediate come up with the money to pay the arrears on the allowance increment to the Ketua Kampongs and Kapitan Cina and don’t make use of the Hari Raya festive season to pay the money to them and tell the people that the BN cares. The people will not believe the BN’s tricks anymore.

They are plenty of things that Hajiji should pay attention to and urgent action is required. He is not getting the full corporation of the village heads is because they have lost faith in him.

A simple allowance increment also can not resolved, what good he can be? The problems in the villages are plenty, and equally in the towns all over Sabah. The Ministry of Local Government has piles of problems to solve, and are they doing that?

The nearest one is the problems in Tamparuli, Penampang, Putatan, and Inanam. If they had put in an effort to get down to the problems, there will be no such problems. The BN had failed miserably and completely.