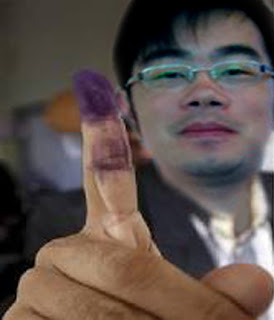 Junz Wong DAP Sabah state assistant secretary echoed the call, said not only is using indelible ink more practical than the biometric system, it has been proven in many countries that this method is efficient and uncostly.

Junz wong who is also DAPSY KK Youth Chief, said he just could not comprehend why would the government of the day opt for a system which is yet to be proven effective and is much costly than a proven & economical system?

Now that Najib has shown commitment in electoral reforms by announcing the setting up of PSC (Parliament Select Committee) to implement electoral reforms, indelible ink system, one of the demands of the coalition for clean and fair election (BERSIH), should be implemented before 13th general election is called. Junz concluded.