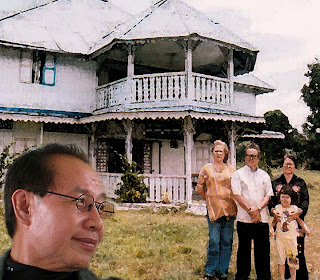 DATUK Dr. Jeffrey Kitingan, the head of the United Borneo Front (UBF) called upon the State Government to protect lands in Sabah and Native Customary Rights (NCR) and to not only stop further alienation of lands to non-Sabahan natives but also to stop taking over native lands for whatever excuses.

Dr. Jeffrey had supported the reasons put forward by the Sedomon family through Nilakrisna James, UBF co-founder and granddaughter of OKK Sedomon Bin OKK Gunsanad, who had voiced the Sedomon family’s objection to the proposed takeover of the Sedomon ancestral home in Bingkor to be converted into a Warisan Budaya by the Jabatan Muzium Sabah.

The allegation by her uncle that the house become a ‘Malaysia Independence House’. He said this at a UBF Borneo Tea Party function hosted by Alex Amik held on 19 August 2011 at Kg. Sungoi, Apin-Apin, Bingkor.

“Sedomon is the icon of native rights and for the Sabah natives he will always, for all time, represent the struggle of the interior natives at the time of the formation of Malaysia where he advocated for native rights and autonomy so that Sabah’s position in this country will keep natives ahead of national development and not be wiped out into reservations if we ever joined Malaya.

“To deprive the Sedomon descendants of their inheritance and ignore the provisions in place in their land title so as to render their private property into a public property is an abuse of the law and an affront to native land rights.

“Their views are paramount and the ‘Rumah Besar Sedomon’ shall retain its majestic title and be allowed to age gracefully as a family home so that it will always serve as a reminder to this country of what Sedomon stood for.

He also stated that while there are merits to acquiring private properties for public interest the Government must also respect the inalienable rights of the Natives to private properties and the terms and conditions of titles must be respected. Such desire to turn private domain to public domain must not be forced upon the owners.

“Native land rights and NCR remain the cornerstone of what is in the Article 8 of the Malaysia Agreement 1963 and the Inter-Governmental Committee Report 1962. The State Government should champion native rights enshrined in Sedomon’s Batu Sumpah and the law and they should not use the law to usurp, reduce or change the nature of those rights or ownership.

“Native land ownership should not have these loopholes. If native owners were to benefit from such transactions it would be different but in most cases natives are being taken for a ride and they benefit little by relinquishing their native lands into foreign hands,” Dr. Jeffrey stated.

Two other natives at the tea party complained that their application made several years ago for native lands were never approved and that their small lots would be reduced further when sub-divided between many descendants rendering future native generations potentially landless and becoming squatters in their own land.

“The State Government seems to prioritise tourism developments and other infrastructure developments when companies and non-natives are alienated lands which should be reserved for native uses. Instead of native lands benefitting natives in these developments, the companies are benefiting, which will lead to the eventual erosion of all native lands from native inheritance.

“If the State Government and State leaders are incapable of addressing this problem, we have no choice but to lodge an official complaint to the King who remains the overall guardian of natives in this country when Malaysia was formed in 1963,” Dr. Jeffrey said.

To another native’s question about opening some of the adjoining forest reserves next to existing native lands, Dr. Jeffrey opined that the State Government should be able to review the status of the forest reserve and weigh the needs of the local natives and decide on the land utilization including de-gazetting part of the forest reserves for native uses only instead of the nefarious use of non-natives or companies for wide scale developments and plantations.

He said, “Land matters have nothing to do with the Federal Government and State leaders must think as Sabahans and not the stooges of their Federal political parties when making these decisions. The State Government should not simply de-gazette forest reserves for wide scale developments as the protection of our lands and environment remains paramount. In this respect, State leaders who simply do this should be questioned by the public and be accountable for their decisions.”

“These are the scenarios that Sedomon was afraid of and fearing that laws would be abused and changed he commissioned that the Batu Sumpah be sworn upon using traditional animal sacrifices and spiritual ceremonies so that the conditions enshrined in the stone would be sacred and protected spiritually. For the natives, the Batu Sumpah is a very significant and symbolic monument that deserves the highest respect by leaders in this country,” Dr. Jeffrey added.

UBF also calls on the State Government to review all alienated lands especially to companies which are being disputed by natives and to revoke such alienations and to re-alienate such lands to the rightful natives which have been recognized since the British colonial times.

“We have already started our CINTA SABAH campaign to bring Sabahans towards a common mindset of protecting their interests in this State. If you love Sabah, you would fight to the end of the earth to protect your rights,” Dr. Jeffrey concluded.