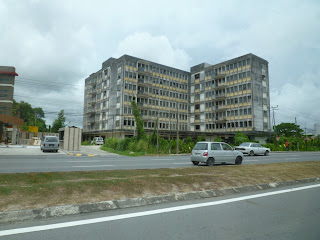 THE HUGE building for the civil servant quarters in Inanam next to the Tuaran main road had been abandoned for many years, and this was brought up by the Sabah DAP sometime ago. Until today there is still no action to renovate the building to make in inhabitable for the use of the civil servants.

The JKR property section had said that the department is preparing to refurbish and make good the apartment building. The question is why still no action taken, are they waiting for fund allocation?

The abandoned building is ideal and with a nice location in the Inanam town area. We do not see the logic in leaving this doing nothing.

“If the government does not need this building, they should sell it out to the people to convert it into a private apartment or a hotel”, said Edward Ewol Mujie the Sabah DAP Vice chairman.

There are plenty of civil servants from the state and federal government still renting houses and apartments in Kota Kinabalu, therefore if this building is upgraded and renovate, it will be best for putting up these civil servants.

The government is spending many millions of riggits every year to rent houses and why they have not arranged to cut the big spending on the tax payers’ money. There are plenty of available government’s houses can be utilized, but there is no proper arrangement and planning.

A very good example is the previous Tanjong Aru civil servant quarters area which had been demolished, and left idling many years now. Until today the 126 acres of land has turned into a secondary jungle.

What is the logic behind the demolition of the Tanjong Aru civil servant housing, and why the government doing this nonsense to aggravate the housing problem of the civil servants? Who made the decision during that time, and why the development project came to a complete stop?

There must be an answer to why the 126 acres of land under 12 pieces of government land titles is left abandoned, and a court case is coming up? We want some answers, and we do not want to see the big piece of land in Tanjong Aru is left abandoned and overgrown with big trees.

There are many other cases in Sabah, and the government is not doing anything. The government is ignorance of the fact that this is negligence on their part and a total failure to discharge their duties to serve the people and the country well. To be straight forward, they can’t even take care of their own housing. If they can’t do their job, they better resign and let someone else who is capable to handle the business.