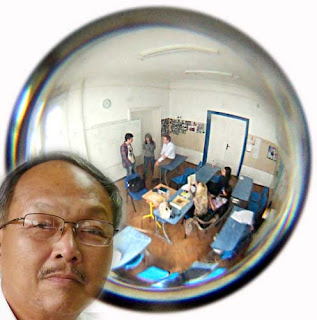 THE ALARMING increased crime rate recently had created fear and worry among the people in Sabah especially in Kota Kinabalu City. The Kota Kinabalu Member of Parliament Hiew King Cheu is making this call to the government and the private sectors to immediately install CCTV, surveillance and monitoring system in the city and in their private premises, in the shopping complexes and in even in the hospitals. In fact these should be installed in every place that is needed to prevent and fight crimes.

Hiew said the system is not expensive and easy to install. The CCTV should be installed in the KK City to keep watch on the street corners, traffic junctions, parks, all public areas, car parks and even in the markets where crimes can happen. There is a need to install the CCTV in all commercial complexes and shopping malls, especially in the dark car parks, corridors and staircases of the complexes.

There were announcement made last time by the government to install CCTV in the KK City, until now we don’t see anything happening and the people are beginning to doubt on their level of responsibility and efficiency. The government had failed miserably on their duty to protect the people from crimes, even with a small task of fixing the CCTV.

The many cases of crime happened in Kota Kinabalu City is piling up, and is getting more serious day by day and is increasing fast. One can easily spot the news everyday in the newspaper. The crime cases were not fully covered in the daily newspaper, and many cases were not reported. The crime rates are definitely on the increase and what can the government and its enforcement going to do about it?

The CCTV will help to deter if not stop most of the crimes, but it can also record the crime process, and to provide a vital evident for the police to catch them. The recent case happened in the Karamunsing car park where a girl was raped and robbed can be avoided if there is a surveillance camera/CCTV was installed.

The three cars of the doctor and nurses in the new 5-storey car parks of QEH2 will not be smashed and broken into if there is CCTV in the car parks. The YB’s houses were broken into and valuables taken in spite constant police petrol is provided. There are many other street crimes which are happening, and these give the police with an increase work load to investigate, to catch and chase after the criminals.

KK MP Hiew urges the authorities to immediately install all the highly needed CCTV and surveillance system in all the major towns to fight crimes. If the government can build a RM388 millions State Administration building and a new library using tax payers’ money up to a staggering figure of RM36 millions, which is of no urgencies, why can’t they spend some money to install the much needed life saving CCTV or the surveillance camera system to add on our securities and safety protection.