WE NEED RCI, NOT 5P BIOMETRIC 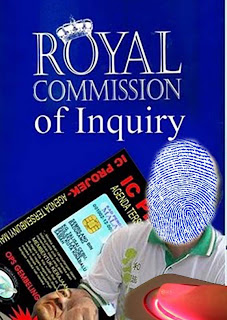 IT IS LAUGHABLE that the Barisan Nasional parties are not even in agreement about the real figures involving the most important issue in Sabah – the problem of the illegal immigrants. The LDP said that according to the 2010 census ‘of the 2,330,779 non-Malaysians in the country are in Sabah.’

And frighteningly, LDP reminded us that; “the non-Malaysian citizens which stand at 27.75 per cent is now The Largest Group Of People in Sabah. If we combine their figure with the other Bumiputera, they form 48.33 percent of the population. We Have Not Even Taken Into Account Those Illegals Not Included In The Census”!

This statement reminds us that they are a lot more foreigners out there than we have on records, and that the natives are already overwhelmed by them! But the Sabah Immigration Director, Mohd bin Mentek, responded on behalf of the government almost a week later saying there are only 200,000 illegals, citing convenient statistics as if official statistics were accurate and reliable.

Wikipedia says that the common saying about "Lies, damned lies, and statistics" is “a phrase describing the persuasive power of numbers, particularly the use of statistics to bolster weak arguments.”

The immigration Director argued to dismiss LDP concern by breaking down the figure stated by LDP and reasoning that some of them were legal workers, expatriates and foreigners, while 200,000 were illegal workers. Another source says that in every four Sabahans, there is one illegal immigrant, meaning 25 percent of Sabahans are illegals!

But what are the real figures? On August 2, the local papers reported that there are more illegal immigrants in Sabah than originally thought, so the 5P registration had to be extended. This again shows that even the authorities don’t know how many illegals there are around us.

They can make officials announcements about official figures but it is all official nonsense because it is all lies, damn lies, and statistics. It so easy to ally fears by giving nice statistics, and to give reassurance as if everything is alright.

Mohd even told reporters that “we registered 161,370 in just 24 days. Thus the registration rate for 5P was better than (those in 2008 and 2009)” as if there is some kind of success we should be happy about.

The other frightening reality is that the government now takes huge figures like 1,000,000, 800,000 and even 200,000 as if they are small figures that we don’t have to worry about. We have forgotten that even 10,000 illegals is something that calls for a national emergency action. So one day we will be talking about 2,000,000 illegals and we still behave as if it is NORMAL?

Let’s bear in mind the hidden truths behind all these statements:

(1) We are not told that the higher and faster registration rate this time is possibly because the number of illegals has increased by leaps and bounds!

(2) Nobody on earth even really knows how many illegals are out there who are purposely avoiding this registration for fear of having to go back to their countries,

(3) Nobody knows how many are arriving to Sabah behind the backdoors everyday because our borders are so porous,

(4) We don’t know how many of them are being given IMM13 documents,

(5) Nobody has any idea how many illegals in Sabah who are already holding genuine Mykads and think of themselves as real Sabahans and not as illegals!

Can the Directors of the State Immigration Department and National Registration Department inform us how many foreigners have been given the many types of documents at all their offices in Sabah in the last few years.

I am asking this because the number of foreigners jamming the space at the waiting area of the NRD office in the Federal Government Administration Centre everyday is quite incredible. I remember that sometime back the number of immigrants seeking IMM13 documents at the Wisma Budaya near Kampung Air looked like there was a festival there every day!

Taking all these and many other realities which we have no space to mention here, we can conclude with confidence that there a lot more we don’t know out there than what the government officials are willing to tell us.

The current 5P exercise seems like a convenient escape for the government in its effort to make the people forget about their demand to have a Royal Commission of Inquiry (RCI) on the illegals.

The opposition parties have accused the BN of having a secret mechanism to make this 5P exercise to increase the BN votes in the next general election. What if the registration is designed to record the illegals to enable them to get documents to vote?

What we need is an RCI, not the 5P registration exercise. Tan Sri Bernard Dompok himself had said on Friday that the semi-permanent ink is a better method to prevent multiple voting than the biometric records because biometric verification is impossible where there is no electricity.

Also I believe biometric records can be manipulated so that what should be shown are not shown during checking, and the illegals or the phantom voters can still vote – several times. And in such cases we in the opposition would be in no position to substantiate our complaints. TSB is right, and I stand behind him on the use of indelible ink.

On the long-proposed RCI on illegals, I would like to ask why is Umno against it, or pretend to be deaf about it, while all the other political parties, including BN components, have been demanding for it? Doesn’t Umno agree that the RCI is the only way to clean up the whole mess with the illegals? What is it trying to hide?

Even the Parliamentary Select Committee on Integrity (PSCI) is useless as a means to monitor the problem of illegals via the NRD. Tan Sri Bernard resigned as its chairman in 2007 due to lack of co-operation from the NRD.

The obvious question is “Why?” If the NRD has nothing to hide, why did it refuse to attend the PSCI meetings? Lim Kit Siang had then commented in his blog: “Bernard’s resignation as PSCI chairman is not a matter which merely concerns him, because of his invidious and unenviable position of chairing the parliamentary select committee on integrity while being a Cabinet Minister.

This mix-up of the separate executive and parliamentary roles undermining the doctrine of the separation of powers of the Executive, Legislature and Judiciary has created complex and grave conflict situations, as the role of parliamentary select committees is to present viewpoints and proposals which are independent and distinct from those of the Executive for consideration and adoption by the Cabinet.

This is why the situation of Cabinet Ministers chairing parliamentary select committees is completely unheard-of in other Commonwealth parliaments, as it creates inherent conflicts and contradictions which has resulted in situations like Bernard’s resignation and statement: ‘I feel that as a member of the Cabinet I may not be able to do justice to the tasks assigned to the committee by Parliament’.”

Again, the only solution is an RCI. We don’t have to prove to the government anymore the serious threats of the illegals, and how grave the situation is. Patriotic leaders in Sabah have talked about the dangers of reverse takeover, they had sent documents, Mutalib M.D. and Dr. Chong Eng Leong have published books about it, Datuk Wilfred Bumburing had sent a thick memorandum, Prof. Kamal Sadiq of University of California -Irvine had produced an academic paper about it (search online for Kamal Sadiq, “When States Prefer Non-Citizens Over Citizens: Conflict Over Illegal Immigration into Malaysia”).