‘E-KASIH’ NOT REACHED THE TARGET GROUP 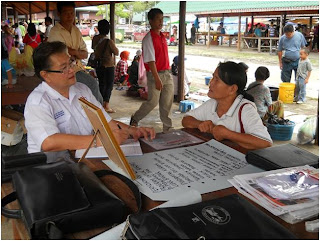 HELPING…..Dr Benjamin Yapp interviewed with the local Tenom folks to offer voluntary services to explain about the benefits of the e-Kasih AZAM tani program for the hardcore poor and poor households from the various kampongs in Tenom, seeking for information and assistance on the registration for the e-kasih AZAM tani and Niaga programs, aimed primarily to alleviate poverty of the hardcore poor and poor families in the rural areas.

DR BENJAMIN Yapp, who is also a Member of the World Affairs Council (Social, Economic & Political Development), commended on the Government’s efforts to implement such concept towards the uplifting the standard of living of the poor people, but he regretted that the delivery system of the ‘e-kasih’ programs failed to have achieved its target group as many rural people complained to DAP Sabah that they were denied of the assistance offered by the Ministry concerned.

Some commented that despite of their past appeal for assistance, but the authority concerned had failed to grant those who were eligible to receive the e-kasih program in the rural areas.

Dr Benjamin Yapp provided the community services in order to assist the eligible poor farmers to apply the e-kasih AZAM 1 Tani program to be register on-line direct with the Ministry of Women, Family & Community development, Kuala Lumpur in order to avoid the problem of poor delivery system as many rural folks complained to DAP Sabah that they were denied of a chance to receive such assistance from those who dealt with the application at the local District office in the rural areas.

He disclosed in his statement made in Keningau that DAP Sabah was prepared to assist the rural people in need of the assistance after he had conducted a general survey on the poverty problems in the interior.

According to his report, there were majority of hardcore poor households earning an unstable monthly income of between RM250-RM400 on their small plough of lands, planting vegetables and harvesting fruits just to survive. There were those who earned only RM500 per month selling vegetables at the tamu ground at Pekan Tenom.

Dr Benjamin personally conducted an interview with a number of eligible applicants for e-Kasih program during his visit to Tenom. Among them were hardcore poor rural residents such as Puan Hion Bte Mangana, aged 57, a native Murut farmer from Kemabong who earned a small income less than RM500 complained to DAP Sabah that her hardcore poor family had been deprived of the e-kasih program although the family deserved to obtain the assistance.

Another local farmer named Ambu Bin Tara, a murut, aged 63, a hardcore poor household from Kampung Masanoi, Tenom approached Dr Benjamin for assistance to apply for e-kasih as he merely earned less than RM500 per month selling some cash crops just to feed his poor family.

A hardcore poor local Murut, a single mother of five dependent children named Puan Arinih Bte Titah, aged 50 whose husband died without leaving behind any money for the hardcore poor family to survive on. She earned less than RM300 per month by selling some vegetables from her 1.5 acres of communal land at Kampung Makakupai, Tenom. She requested help from DAP Sabah to help register for the e-kasih AZAM tani program.

The respond from the interviews from several villagers who came to learn of the e-Kasih AZAM Tani program from DAP Sabah was good despite of the fact that many of them had not heard of the type of assistance provided to hardcore poor families in the rural areas said Dr Benjamin Yapp who spent some time explaining the benefits of the e-Kasih AZAM tani and Niaga programs to the local community who gathered to seek for his voluntary assistance.

Dr Benjamin Yapp had earlier made contact with the Ministry of Women, Family and Community Development, Kuala Lumpur in his capacity as a co-founder and chairman of Koperasi Pengguna Sabah Berhad Rural Development Committee in order to complement with the Government’s efforts towards helping to eradicate poverty among the hardcore poor and poor families in the interior of Sabah, Malaysia.

He took this initiative as he had the interest of the rural people at heart and felt compassionate to see the sufferings of the hardcore poor families that he took great pity upon during his one-and-a half years of voluntary services for the local rural communities in Keningau and Tenom.

He was committed to help the local rural folks regardless of their status, or affiliation to any parties without any rewards, but the most important factor was to offer his unfailing services for the local rural communities who deserved to have a better standard of living.

DAP Sabah urged the Government to extend more opportunities to the local hardcore poor of the interior of Sabah, Malaysia who deserved to obtain the e-Kasih AZAM programs in order to uplift their standard of living as there were thousands of hardcore poor and poor families in the interior of Sabah, Malaysia who had missed this opportunity that they deserved for a better livelihood for their families and children who had been denied of their rights for a better standard of living under the present Government.