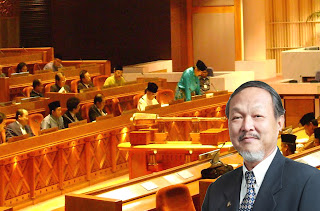 A RECORD high speed of 3 hours on the approval by the Sabah state assembly to pass a supplementary supply bill of RM1395 millions came as a shock to many people in Sabah, especially this amount is that huge.

There was no thorough debate, and only 5 assemblymen expressed their views. The people said this could be a measure for gearing up towards the fore-coming 13th general election, so that the huge amount of money is dumped into the system to fish and harvest for votes.

The money is drawn from the state consolidated fund which is also a reserved fund of the people’s money. A sum of 305.7 million is used for the cash flow and the rest of RM1089 millions are used for other financial regulation involving RM675 million for investment of equity in Innoprise Corporation; RM300 million for development consolidated fund; RM113.8 million for JKR; railway and DID.

RM120 million is used for the maintenance of bridges and roads in the state including those in the municipal council and district council lists. RM10 million for the relocation of water mains affected by road works and RM47.2 millions to pay water concessionaires. To buy dairy cows from New Zealand costs RM8.2 millions. A sum of RM8.1 million is for the Sabah Forest Department activities, especially enforcement.

Every year there are huge amount of money being taken and spent to upgrade roads and bridges, why are we still having the worst road and plenty of “Taufo” roads in Sabah? Why RM675 million which is equivalent to half of the total of this supplementary sum is put in the Innoprise Corporation, and when are we going to see some real and positive return and benefits?

Sabah DAP KK MP Hiew King Cheu viewed the Sabah State Assembly sitting for only two days is merely a sitting mainly created to pass the Supplementary Bill and made it a quick one. They spent only 3 hours to get it done. It is carried out hastily, not being scrutinized, justified, adjusted, and reasoned out?

The sum of RM1395 million is a very big sum for a state and why it is done in a rush? This already demonstrated that the people in the BN have nothing more to say but simply agreed to everything that is tabled for approval. This is definitely no good for the State and the people in Sabah.

The state government had dished out so much money to feed the various expenditures under the various departments, but we don’t see any of this money is for the poor, the needy, or even for the additional allowance increment for the Ketua kampongs and Kapitan Cina.

There is no mention on the allocation for the urgently needed industrial and agriculture development, how can we achieve food security in Sabah which is not only compulsory but also urgent now?

This is a very clear indication on how bad the BN is managing our financial resources and implementing long and short term plan to benefit the people of Sabah. The BN had failed miserably, and that is why Sabah had fallen from the ‘richest state to the poorest state’ in Malaysia in spite of the very rich natural resources inherited.

The true fact is, we are already brooked and bankrupt now. Do we still want the BN to continue to run our state and bring us into further hardship and further bringing us jeopardy? The choice is yours and is in your hand.