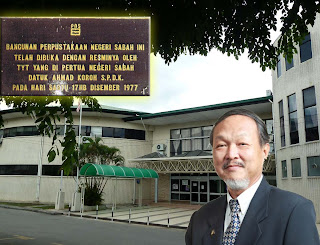 THE PROPOSED demolition of the KK central state library had become a big issue among the people here in Kota Kinabalu City. It has attracted many complaints, views and objections. There are people who insisted that the 35 years old State Library is to be preserved, upgraded, repaired and fully renovated to cater for the people, and this is especially that the building can be classified as a heritage building with historical value.

The KK City needs a town library centrally located within walking distance and easy reached by the many thousand of people who frequent the library to borrow books, to search for reference material, for leisure readings, going through the news papers, and to use the internet services.

The government said the building is going to be demolished due to the structural problems is totally rejected by many professionals including architects. They said who is the one who condemned the building? They said there are no obvious problems arising in the building structure except there is some minor defects which can be easily overcome without much cost.

This library is just a double storey building, what is so dangerous about it, will this collapse and needed total demolition. If this building has to come down, then all the rest of the shop buildings in KK and even the High Court and DBKK building have to come down too. This is because these building surrounding the library were built either before or shortly after the library being built.

KK MP Hiew was shocked when he saw the perspective view of the funny looking proposed library building to be built next to the Perdana Park in Tanjong Aru. The ridiculous shape of the design is definitely not coming from a fully qualified architect, but just looks like something from outer space. He also heard that the design actually came from a design competition.

The authority called the RM36 million new building as the nation’s first “green” library. The Sabah State Library director Wong Vui Yin said their aim is to create a stress-free environment and to blend the architectural design and its landscaping with the surrounding environment.

The 1.2 ha land is situated directly under the flight path where every day many big jets hammer the area with exploding sound, is it a place conducive for quiet reading even with the so called sound proof system? Further more how can the people from the city centre get to this new library, is the library going to provide special shuttle bus for them?

The city centre library has to be repaired and upgraded immediately, and from the observation and inspection made by many engineers and professionals, the damages to the build structure are superficial and no big deal.

If the building has been constantly maintained and repaired, there wouldn’t be any serious defects appearing. This is a total negligence on the part of the government and the people in charge of the building. Why should we wait until every thing has gone beyond repair and fallen to pieces then demolish the whole thing, especially this library? Is the BN government creating another big project under their administration?

KK MP Hiew said it is no need to demolish this library to make way for the Judicial Department, but in fact the government should upgrade the building by using a small sum to make it serviceable for at least another 20 years. For the High Court, they can always go for the choice of moving out from the city centre or use the open space/garden next to the court house or in front of the court house. The final conclusion is that don’t ever think of demolishing the library in KK city centre, the KK folks will go all out to protect it.