WHERE IS THE KKIP SCHEME LAND TITLE? 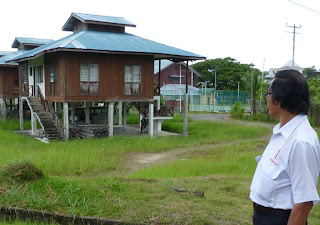 THE PEOPLE in Sepanggar who are under the KKIP resettlement scheme housing felt that they have been cheated by the government on the long delay in receiving their individual land titles for the houses which is now a long wait of almost 20 years.

What happen to the land titles, and these are supposed to be the compensation and replacement towards the previous land owned by them which had been used to build the Kota Kinabalu Industrial Park.

The reason on the long waited delivery of the promise land titles to these people is believed to be the faults of the KKIP Sdn Bhd, which is a subsidiary company of the Sabah Economic Development Corporation (SEDCO).

The land titles should have been released to the people here long time ago but they are still waiting for the delivery. There is no news even though the Sabah DAP KK MP Hiew King Cheu had brought up the issue some years ago. It is also learnt that the land premium has not been paid to the land office on the subdivision of land and issuance of land titles by the KKIP Sdn. Bhd.

Therefore this is delaying the issuance of titles. If this is true, the KKIP should be held responsible for failing to fulfill their part of the deal. The people here do need the land titles to be held in their hands.

Edward Ewol Mujie, the Sabah DAP Vice Chairman who visited the resettlement scheme houses here had spoken to some house owners here, and he found out the situation of not receiving their respective titles is highly unfair, and the KKIP Sdn Bhd should fulfill their part in producing the titles immediately.

The land premium must be paid to Land and Survey Department as soon as possible for the release of the subdivided land titles to every one here.

Edward said the houses constructed here are of cheap timber structure, and already houses are showing sign of decay and rotten timber failure. Some even have fallen into pieces and near collapse.

How can the houses be constructed with such a poor standard and couldn’t last for longer period. Now the people here had suffered and have to come up with more money to get some repair done. This is a clear indication of the poor performance of the BN government and the negligence on their part to take good care of the people.

The KKIP Sdn Bhd must come in to repair the houses and deliver the land titles to them. The KKIP has made a lot of money due to the rapid increase in the land price. There is no excuse for the company not to come up with a plan to fulfill the promises.

The people here said they are still waiting for a reply and they will decide on whether to continue to support the BN any more. It is better to change and to give the Pakatan Rakyat fullest support and may be there is a new hope.