AKJAN AS NEW BREED OF BAD AND EVIL LIAR 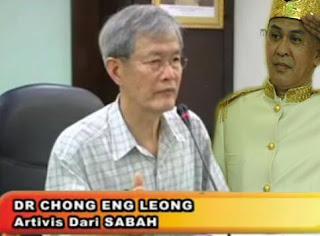 DATU AKJAN as Chairman of PEKIDA objected to the call to set up RCI on illegal immigrants and Project IC in Sabah. He said amongst other things; could lead to misunderstanding and disunity among the various ethnic groups; RCI was made with ‘bad and evil intention’ aimed at inciting the people of Sabah to hate the BN Federal Government

He also said that there was no such thing as Project IC to issue Malaysian ICs to foreigners He warned that if the RCI promoters continue to push for it, it may one day backfire on them.

Akjan’s statement certainly had created intense revulsion from all sectors of concerned Sabahans, wondering what the warning of ‘backfire’ means. Just to remind us genuine Sabahans about the population of illegal and ‘legalized’ foreigners in Sabah in 2010:

Foreigners as per Census Department report = 955,000 (all have documents?)

Paperless foreigners = one million? (no one knows)

Many thanks to Datuk Johnny Mositun of PBS and Datuk Seri Wilfred Bumburing of UPKO, both are BN components, for reminding the public again about this grave issue confronting Sabah, a time bomb about to explode at anytime. Thank you for voicing out we genuine Sabahans’ widespread disgust with this Dr. Datu Mohd Akjan.

A PhD holder, wonder where did he receive his primary and secondary education? In Kudat? He said he was born on 7 July 1957 in Kg. Limau-Limauan, Kudat.

But Tanjong Kapor ADUN YB Datuk Teo Chee Kang had met the 70-year old Ketua Kampong who ‘brushed aside without hesitation’ the story of Akjan being born in that kampong.

Hassnar Ibrahim, an ex-ISA detainee, in the trial of 1999 Likas Election Petition, testified under oath, stated (as written in the Notes of Proceeding) that he knew who Akjan was. Hassnar stated that Akjan came to Sabah from Philippines in 1970’s and had been arrested and sent back to country of origin.

“He came back and somehow got Malaysian citizenship. He was arrested for 27 months under ISA for his involvement in issuance of ICs to foreigners in Sabah. I knew that there were hundreds of thousands of Blue ICs issued to foreigners; these people were not true Malaysians. In fact they were not Malaysians.”

The testimony was not challenged.

Home Minister Datuk Seri Hishammuddin stated categorically early this year that there was no Project IC in Sabah and rejected the said RCI to be set up.

Sabahans are not fools. Come PRU13, I am certain that genuine Sabah voters will remember what Johnny Mositun of PBS and Wilfred Bumburing of UPKO had vehemently expressed on this subject and will vote accordingly.