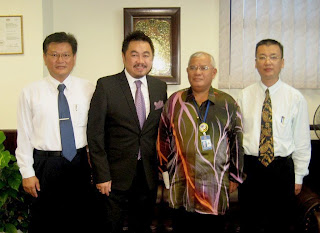 COURTESY……Gordon (2nd from left), Kong (left) and Chang (right) posing with Kamaruzzaman (2nd from right) during the courtesy call on the latter.

THOSE eligible citizens who have yet to apply for the Bantuan Rakyat 1Malaysia (BR1M) have been urged to do so without any further delay, before the 10 January deadline.

Urging this was Gerakan Sabah Chairman Datuk Gordon Leong, adding that those who have yet to apply for it to approach its special service counters for BR1M at the vicinity of the Foh Sang shops on this coming Saturday 24th December, from 10.00 am to 2.00 pm, where they will be assisted with their application.

The applicants must bring along a photo copy of their MyKad and the pay slip, if available. This will be followed by its another similar service to be catered at its Monthly Mobile Service Counter at Inanam Township on Sunday, 25th December 2011.

“All forms collected by Gerakan Sabah will be submitted directly to the Inland Revenue Board (LHDN) Sabah branch headquarters at Wisma Hasil in stages,” said Gordon.

In a statement issued here today, Gordon also explained on the procedures involved that the LHDN is only an agency entrusted by the Government to facilitate the registration of BR1M applications. It will then submit the applications to the Ministry of Finance for verification and approval.

This was told to him by the State LHDN Director Kamaruzzaman Bin Hj. Ab. Salleh, during a courtesy call on the latter, today. Accompanying Gordon were Kong Yu Kong, the Party’s co-ordinator of BR1M Application Service Counter and Chang Shui Kiong, the State Youth Chief.

The main objective of the courtesy call was to brief Kamaruzzaman on the total forms collected by Gerakan Sabah through its various service counters set-up between 13th to 18th December at Putatan, Foh Sang, Wisma Kosan and Gaya Street.

During this period of time, Gerakan Sabah had distributed some 1,000 application forms to the members of the public and thus far had received 700 applications.

During the courtesy call, on behalf of Gerakan Sabah, Gordon thanked the Director and his officers for all the assistance and co-operation rendered to the Party, in helping out with the BR1M applications.