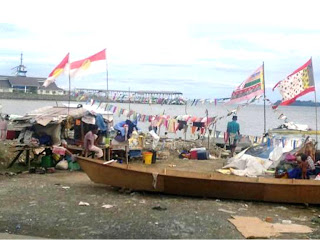 The squatter homes of the Pala’u communities have spread quickly recently along the coast near Bandar Wilayah here.

MDLD Enforcement Head, Aliudin Miasin said that the demolishing works have to be done after receiving complaints from members of the public in the area.

Besides, the squatter colonies are an eyesore to the area and rubbish littered from their houses are becoming a major problem, he said.

“We have warned them to move since last year but we have not been firm for humanitarian reasons,” Aliuddin said.

“Now their numbers are increasing. Their children have become beggars and are a nuisance to the public and the business people,” he said.

The operation which started at 8.45am and completed two hours later, were participated by 14 enforcement officers led by Aliudin and monitored by MDLD executive officer Mohd Fawzi.