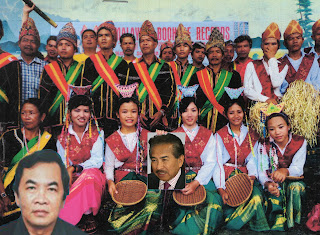 In a statement issued here, its President, Akian Ahkiew, said that a meeting of the association’s Supreme Council in Pitas last week had unanimously agreed to express support for the last State Budget and to Musa as a dynamic, progressive and people-oriented Chief Minister.

“We fully support the budget mainly because it is strongly oriented to people-development,” Akian said.

“Obviously the Chief Minister has the people’s welfare and socio-economic development in mind when he prepared the budget and for this we feel we need to express our support and gratitude to Datuk Musa.”

Akian also said that even though the Tombonuo people were not specifically mentioned in the budget, he is confident the budget is meant for all Sabahans, and the Tombonuos will not be left out of the socio-economic development plans and implementation.

He said there is now a much stronger spirit for progress among the Tombonuos compared to what they were before.

“This is because they can now feel the impact of development with so much development taking place in Pitas district, especially in the area of agriculture and aquaculture,” Akian said.

“They can see that even Pitas, which was once a sleepy one-horse town, has now expanded into a much busier township with high potential for growth because it is now linked to both Kota Kinabalu and Sandakan by road.”

In the meantime, Akian called upon the Tombonuos who are mostly resided in the East Coast, to support the government and take advantage of the many socio-economic opportunities available in both the public and private sectors.

“We certainly look forward with confidence to more development for the Tombonuos in all areas of economic activities under the people-oriented leadership of Datuk Musa,” he said.