‘ANYTHING BUT UMNO’ IN EAST MALAYSIA TOO? 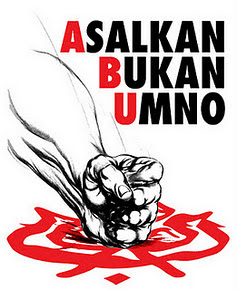 STATE activists that want change in the way the Federal Government treat Sabah and Sarawak had in principle agreed to support the Peninsular-based ABU or ‘Anything But UMNO’ movement that called for the downfall of UMNO in the next election.

We have held series of talks with one of ABU leading leaders, lawyer-activist Haris Ibrahim who flew to the Federal Territory of Labuan yesterday, in defiance of Sabah's ‘persona non grata’ order slapped against him recently.

However more are to be refined by the two major stakeholders in Sabah's current opposition front, the United Borneo Front (UBF) and Sabah Progressive Party (SAPP), and i shall be reporting to them to get a good judgement on what transpired in our meeting with Haris.

We agreed in principle to support this ABU campaign because UMNO has shown that it has been meting bad decisions and policies against Sabahans and Sarawakians in the past 48 years we are in this Federation.

The very fact that both Sabah and Sarawak are the poorest states now speak volumes of what UMNO-led Barisan Nasional had done to our gas and oil resources. So we agree that UMNO must go at this coming general election.

It is understood that also in the meeting were Sabah activists Michael Liew and Kanul Gindol but the latter left early and did not join another meeting in the evening. Local singer-activist Atama was also in attendance.

Haris was barred from entering Sabah, as well as Sarawak before, as the state authority deemed him to be a threat to its own security. Haris was however not stopped in Labuan though he said there were special branch officers taking pictures of him at the airport here when he arrived.

At this moment we might have a slight refinement on the name ABU for East Malaysia. Some of us had wanted ‘UBA’ which could mean ‘change’ but also stands for United Borneo Alliance to underline that we wanted a restoration of the way the Federal Government treats us as equal partners and not wanting us more and more just as mere subservient to the majority party in Peninsular. So, it is not just ‘anything but UMNO’ but we want a real change, a restoration of the special rights and position of Sabah and Sarawak within the Federation, this including our autonomy power.

While ABU organisers in Peninsular are set to throw support to BN nemesis, the Pakatan Rakyat, we the opposition leaders in East Malaysia, especially Sabah, while all for ‘Anything But UMNO’ are more keen to support state-based parties and not readily throw support to another Peninsular-based party, led more often than not by ex-UMNO leaders themselves.

Haris and myself ‘quite’ understood the Borneo Agenda sensitivities and acknowledged that, with the presence of Peninsular-based PR in Sabah, it is an uphill task to ensure a one-to-one fight with BN in all seats in Sabah. We appreciate ABU firm stand to pave for a straight fight in all the 222 Parliamentary seats at stake, but this is politics and we must manage it accordingly.

We hope to iron out differences. We in East Malaysia do not want to be taken for granted that just because we did not want BN or UMNO anymore, and an incoming new federal government would treat us not differently from BN and UMNO vis-a-vis our legitimate autonomy demands and our special position in the Federation.

We also hope to come out with our strategic campaign productions very soon, hopefully ahead of the general election, that will underscore all the failures of UMNO and BN and the glaring abuses of power by their kleptocratic leaders.