ARTICLE 153 IS NOT JUST FOR MALAYS! 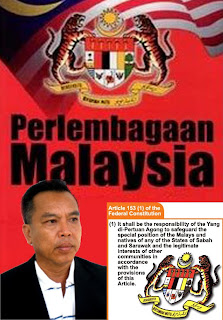 DATUK Ibrahim Ali just came up with a gem of truth when he said there is no need for a Race Relations Act if people behave.

“If everyone behaves, if nobody touches on (Article) 153, nobody questions this and that, condemns this and that, and at the same time recognises the disparity of wealth between Malays and non-Malays, I don’t think we need any additional Act,” he said.

How very true! Out of so many idiotic statements we have heard from political jokers, this one is a real gem of truth. The funny thing is that Ibrahim thinks he said something very brilliant when in fact it is a simple truism (truth that doesn’t need to be said).

But who are really behaving badly in Malaysia? Who are those questioning this and that, condemning this and that? I guess only Ibrahim is the luckiest guy in the country because he makes all sort of seditious and racist statements, misbehaving in a way that he should be arrested and charged in court, but nobody touches him, no national leaders even dare to ask him to shut up. 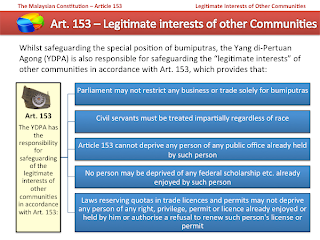 Of the Race Relations Act he said that “We will see the draft of the Act. If it is good for the country, we have no problem supporting it,” he said. “But whatever Act is introduced... it must not encroach upon (Article) 153, Islam as the official religion of the Federation, Bahasa Melayu as the national language, the sovereignty of the Malay Rulers.”

We all know that there is no question about Islam being the official religion, Bahasa Melayu as the national language or the sovereignty of the Malay Rulers. What I would precisely prefer to talk about is Article 153.

It is very tiring to keep hearing political leaders speak about Article 153 as if it belongs only to the Malays. If we read the article in its entirety we will be reminded very clearly that it is not a protection for Malay rights, and neither has it got to do with any so-called social contract.

It says that the Yang di-Pertuan Agong is responsible for the safeguarding the special position of the Malays AND the natives of Sabah and Sarawak, AND the legitimate interest of other communities. The simple meaning is that the Agong is the protector of ALL Malaysians, and not just the Malays!

So why do leaders like Ibrahim Ali keep harping on this Article 153 as if it is a sacred provision for the Malays only? Are they idiots who can’t read? Or are they stubborn morons who deliberately behave like idiots for the purpose of making political mileage over something that has nothing to do with what they are saying?

I fully support Senior Christian leader Reverend Dr Eu Hong Seng who said that Article 153 had been used to bully others, and that it was something that “needed somebody to say it.” He told an online portal he had nothing to fear despite the fierce reaction from various Malay groups and denials by the government that Christians or any minority group had been sidelined.

He described Perkasa’s call for him to be investigated for sedition an example of fear-mongering. It is time somebody said and stood up bravely about it. The Deputy Prime Minister hit back and said the provision was never used to bully anyone. But has he not heard radicals like Ibrahim Ali abusing the provision all the time? How do the non-Malays feel when radicals talk about Malay supremacy or when the DPM himself said he is a Malay first and Malaysian second?

The radical groups who idolize Article 153 as if it gives the Malays special rights, privileges, positions and bullying power need to be told to stop the negative attitude. What I see in the Article is something very positive for Malaysians as a whole because to me it is a strong unifying provision, under which we are protected by our King as equal partners in Malaysia.

It is NOT a provision to give the Malay superior position. It doesn’t give the Muslim the right to bully other people and other religions. Under this provision the Malays have equal ‘special position’ with the natives of the Borneo States. Under it, the Malays are on equal position with the Ibans, the Penans, Bajaus and the Kadazandusuns. We have the same special position of the Malays, so we can tell the Malays like Ibrahim Ali to shut up and grow up if we want to.