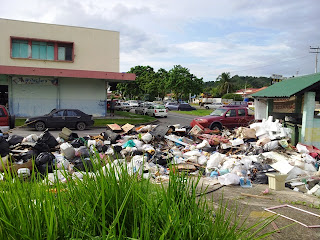 THE CITY Hall has been taken to task for the mounting heap of rubbish left uncollected for several weeks now at the Kepayan Rumah Murah bin centre near here.

Sabah Progressive Party (SAPP) Kepayan CLC Complaint Bureau Chief, Foo Si Chin said nearby house owners and shopkeepers had already complained to the City Hall about the foul smell emitted by the garbage but nothing happened.

He said they expected that the rubbish would be collected on Tuesday as it was a working day already but still nothing happened.

“The bin centre is located near the St Thomas Church so during the recent Christmas mass the congregation are forced to bear the foul smell,” he said.

The situation was made worst when the plastic bags containing the rubbish were torn by dogs and left in the rain, he said.

“What are the leaders and the officers of the City Hall doing? Have this place been gazetted as a public dumping ground?” he asked.

Foo said that now Christmas is over, the people in Kepayan Rumah Murah were anxious if they had to endure the unbearable smell as they usher the New Year 2012.