ILLICIT OUTFLOW OF FUND, A REBUTTAL FOR GUAN ENG 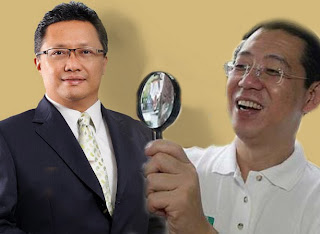 THE GLOBAL Financial Integrity (GFI) report once again stirred things up in Malaysia. It cited Malaysia as number five in its list of countries having the most illicit flow of fund in the world in 2008.

And without missing a beat, the opposition was quick to accuse BN with outlandish claim of bleeding the country dry in billions of dollars through corruption. Typical.

Amidst listening to the chest thumping rhetorics from Lim Guan Eng et al., I suspect many people may have missed out several important points arising from the GFI's report.

I shall highlight some of them here. Firstly, it is interesting to know that GFI insists on reminding the public that contrary to the popular belief, corruption is not the main cause of this huge illicit flow of fund. GFI estimates that between 60% to 65% of the total global amount of US1.2 trillion (in 2008) was due to commercial tax evasion activities and 30% to 35% was due to criminal activities such as drug trafficking, human smuggling, racketeering etc.

GFI estimates only about 3% was due to corruption. Secondly, although the report did estimate that corruption was about 3% of the total amount globally, how much of it is Malaysia's portion is anybody's guess.

Why? Because the report did not specifically detail out how corruption was the main cause for Malaysia except to say that ‘pervasive corruption’ normally the reason for developing countries.

This uncertainty is further validated when the report itself concluded that "it is difficult to point out the reasons behind this massive illicit capital outflow without carrying out in-depth country case (of Malaysia)."

Thirdly, the GFI report pointed out that human smuggling was one of the biggest causes for illicit outflow of fund from developing countries. A recent report by insightcrime.org put human smuggling as the second highest income earner for criminals globally.

The government is fully aware that human smuggling is big business for criminals in Malaysia. These criminals use Malaysia as part of their global operation. Since Australia is apparently the favorite final destination, both countries tried hard to eradicate it. This culminated in the idea of ‘Malaysia Solution’.

Had the idea been allowed to take off, a big chunk of the illicit outflow of fund from Malaysia would have been greatly reduced.Fourthly, GFI chief Raymond Baker personally insists that global illicit flow of fund is largely driven by commercial tax evasion activities, especially by the western Multi National Corporations (MNCs).

These MNCs are manipulating serious loopholes and fundamental weaknesses in the global financial system.These loopholes and weaknesses somehow facilitate the mushrooming of global shadowy tax havens, secrecy jurisdictions, disguised corporations, anonymous trust accounts, fake foundations, trade mispricing and money laundering techniques, all of which are the favorite tactics employed by the MNCs.

No one really knows who the final beneficiaries of those accounts are because the laws in the tax haven areas protect the real owners' identities.According to Mr Baker, the MNCs rampantly use underpricing, overpricing and transfer pricing methodologies.

For example, in its simplest form, the MNCs' operations in the developing countries would under price their exports when they sell their products to obscure corporations based in the tax havens of the British Virgin Island or the Cayman Island.

These corporations are believed to be related to the MNCs themselves. By doing this, the MNCs deliberately register ‘huge losses’ in the developing countries they are based in.

They then transfer the profits to the tax havens' jurisdictions. This is ostensibly done to avoid paying taxes which in the end resulting in huge illicit outflow of fund from the developing countries as evident in the GFI statistics.

Sadly, all this is considered legal or at least permitted under the current western based financial system which the GFI vows to fight rigorously. The GFI further claims that current laws permit MNCs to report its global financial standings in one consolidated group statement rather than reporting them based on country by country basis.

This has made the illicit flows relatively easy to conceal. If by tomorrow, a new set of laws mandates the MNCs to publish their profit and loss statements based on the countries they are operating in, we will immediately see these activities ceased, as no global corporations dare to risk their corporate morals if they could be exposed.

Fifthly, most of the top ten countries listed are oil producing countries. This is not surprising since everyone knows MNCs in oil industry conduct extensive cross border transactions which could lead to illicit flow of fund activities.

The report did mention Petronas in the Malaysian segment but unfortunately the GFI report's quoted source was merely some articles in the newspapers. Petronas swiftly denied it and promised to take legal action if the allegation did not stop.

Yesterday, the Prime Minister announced that a special task force would investigate and

look into the matter. I welcome the good idea. The amount is too big to be ignored. In fact, the special task force should talk to GFI.I believe a more thorough study could reveal other elements unique to Malaysian experience which the GFI report may have overlooked.

For example, if 2 millions foreign workers in Malaysia send RM300 monthly to their families back home using cheaper but unconventional transfer method such as black-market money changer, does it mean RM7.2 billion is bled away annually from Malaysia by the foreign workers sector alone?

I hope the task force will shed some light into this much talked about illicit flows.Illicit outflow of fund is a serious issue indeed. It impoverishes the poor, creates income gap, incite instability, reduces growth and cancels out foreign investments.

It is, according to Mr Baker, the worse form of economic punishment the poor have to endure since slavery. A lot still needs to be done. From reforming global financial system to ensure transparency and openness in conducting trans-border business. I am grateful that some countries are heading in that direction. Hopefully Malaysia will follow suit and be out of the infamous list in the years ahead.