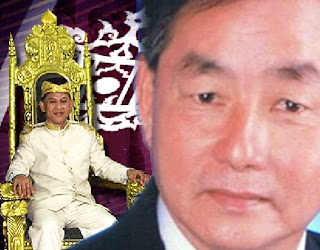 THE FEDERAL Government's reluctance to act against Datu Akjan Ali Muhammad, including over the Sulu Sultan issue, suggests he holds the real power in the State and not Umno, according to Sabah DAP Chief, Jimmy Wong.

He said Akjan's defence of foreigners holding Mykad and warning of tension if the issue is pursued by the Barisan Nasiononal components also suggest that the Mykad recipients are under the control of him and his supporters.

"He is the one controlling Umno and not Umno itself. If there was no Akjan, Umno will lose the elections. Akjan is actually holding the power in Sabah," Wong claimed.

"This is why Umno cannot do anything about Akjan and instead gives him projects. Interestingly, Akjan now has become the leader of an NGO called Pekida," he said.

He cautioned that the condescending attitude of federal towards Akjan may not go down well with the Indonesians and that the locals may be caught in-between.

According to Wong, the PBS government had passed a motion in the State Assembly to set up the RCI in the 1990s but it was rejected by the Federal Government because PBS was in the opposition then.

"I, myself, have tried three times recently in the state assembly but was rejected. Then SAPP had its turn to propose but also failed," said Wong.

He said the so-called "Project IC" was born out of the desire to topple the PBS-led Sabah Government.

"Now they are all over the place - Lahad Datu, Sandakan, KK, Keningau and Kinabatangan alone more then 150,000."

Wong urged PBS leaders to call for an emergency meeting to pass the motion to set up the RCI.

On another note, Wong said the public are invited to the party's open house at Km 11 Kg Dambai in Penampang on Dec. 23.

He said 500 gifts would be given to children and performances from artistes such as Teresa Kok and Tengku Aziz from 6.30pm to 11pm.