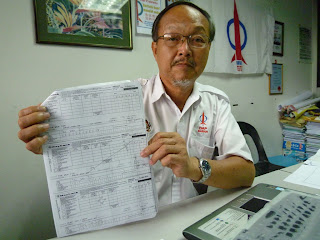 THE TELEPHONE conman is active in another ‘Big Business’, and many people had fallen into the con trap. Many hundreds of thousands of Ringgits have been voluntarily banked by victims into some unknown and not traceable bank accounts for the conmen.

It is surprising that there are many people who had fallen into it, and this time is the ‘big lucky draw’ won with huge sum of money up to million ringgits. In the past, many people did receive such phone calls regarding the big prise won, but they chose to ignore them.

The Kota Kinabalu Member of Parliament Hiew King Cheu has recently mentioned that there is a group of telephone conmen who used the telephone and the internet computer system to con large sum of money over the credit card from the people who believed in them and bank in money for them.

The KK MP also asked the general public to be very careful and wise to this type of tricks. Unfortunately, today the MP Hiew has received two big cases of con conducted over the telephone calls made from Kuala Lumpur and Hong Kong.

The victims came to see the MP crying that their money was conned and there is no way that they can recover the money back. The amount of money involved in the first case is RM225,000 and the second case is RM244,550.

In both cases the victims were believed to be the winners involved in winning some ‘big lucky draw’ from Hong Kong, and the prise money is more than RM500,000 each. The conman usually is some nice ladies speaking in Mandarin language.

They normally congratulate you have been drawn as the winner of the big price, and you are required to remit some money in order to process the price money. Later they will persuade you to invest your price money in bigger draws or they said they will invest for you, but more cash investment from you is needed.

The victim usually fell into this trick and remitted more cash into some untraceable accounts. The bank in slips that were shown to MP Hiew is shocking enough, and the money being remitted is in huge sum up to RM 50,000 to RM70,000 at one go. Both the victims had remitted and banked the amount as requested in a hurry.

The victims have been advised to make police report for the police to start work on the investigation and probe into this oversea con job. Hiew wants the police to immediately set off to track these conmen and to recover the huge sum of money. The Interpol must be brought in to help the investigation, because this seems to be involving international crime ring.

In view of these many money con jobs involving large sum of money, MP Hiew said why our society and its people is so easily being trapped in these simple con job. The people must stay sensible and alert for not falling into this trap, and must not be greedy because there is no such ‘luckiness anyway’!