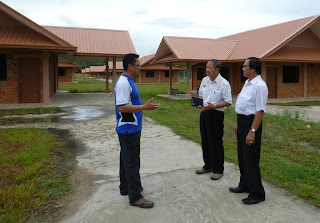 THE KKIP (Kota Kinabalu Industrail Park) has faced another round of complaint on its promised resettlement housing scheme involving the people in the Kg Norowot and Kg Sukoli, Telipok.

According to the people here that the government linked company (GLC) KKIP had agreed and to arrange to provide the houses under the agreement made during the taking over of their kampong land to build the industrial park. The resettlement scheme houses were part of the deal besides the money paid as direct compensation.

The people here brought in the KK MP Hiew King Cheu to assist in the matter and to highlight their problem and wish that KKIP management together with the government can see their problems. Hiew was on site with the Sabah DAP Vice chairman Edward Ewol Mujie to listen to their problems and requests. There were more than 20 people attended the meeting and after that they took a walkabout around the housing site. 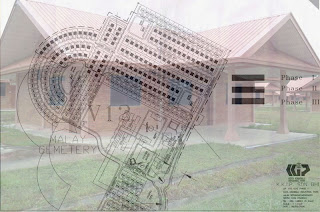 For Phase 1B, there are 33 houses given. These figures showed that there are as many as 75 people did not get their promised houses.

The resettlement housing scheme is near completion, except the water, electricity and sewerage needed to be connected up. The people here said they don’t really know when they can move in and in fact they have waited for almost 10 years.

Their old houses were demolished and their land taken by KKIP, and this forced them to rent expensive houses else way. The people here had lost their income generated from the land too. The kampong folks said they really suffered heavily, and the worst part is that some of them didn’t even get a house as compensation.

In the resettlement housing, there are other problems put forward saying that the house is too small, no fencing, wrong positioning of front door facing opposite house, not enough street lights on the main road, no community hall, and shops. They want the KKIP to look into all these.

KK MP Hiew said he will liaise with the KKIP and find out actually when the housing will be ready for occupation. He commented that this is really taking too long to complete and the people had suffered enough, and ten years is really a long time to wait. He urges the KKIP to start work on the balance of the house units to provide everyone from the kampong who lost the land and houses to have a house as replacement. This is agreed in the acquisition of the kampong land and this must be fulfilled.