WARISAN HARTA AGAINST THE MAS PLANS 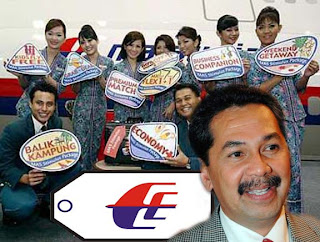 Sharing the general public view in Sabah that MAS should do its social obligation and prioritise on this more than its commercial ambition, it urged the Federal and State Governments to play their roles to find a much better alternative to address this issue.

These are in addition to MAS' rationalisation exercise involving eight routes of its international network announced last week.

He said WHSSB viewed the decision made by Khazanah Nasional Berhad, as the Federal Government's investment arm and the biggest shareholder in MAS, to implement a share swap with Tune Air Sdn Bhd as just to protect the commercial interests of both airline companies because it was made without seeking the view of WHSSB which represented the State Government (minority shareholder).

For the consumers and business people in Sabah, he said, the decision to suspend the said international flight services by MAS is very frustrating and feared this would affect not only investment activities but also tourist arrivals as well as the interest of foreign airlines to land at Kota Kinabalu International Airport.

He said this will also affect the West-East Malaysia national integration mission and objective, as both MAS and AirAsia without any healthy competition between them would only pursue their commercial objective alone and no more prioritise on social obligation.

"I believe the objective of national integration is still relevant and not old-fashioned," he said, in a statement.

Ramlee, who is also Bugaya Assemblyman, suggested that Sabah and Sarawak State Governments have a re-look at rationalising the roles of MASwings and Sabah Air Sdn Bhd with an objective to merge both into one entity to cater to the domestic and Brunei, Indonesia, Malaysia and Philippines - East Asean Growth Area (BIMP-EAGA).

"This should be looked at seriously by MAS, as the proprietor of MASwings, because the company belongs to Malaysians and should not be simply handed over just for the commercial interests of certain individuals," he said.