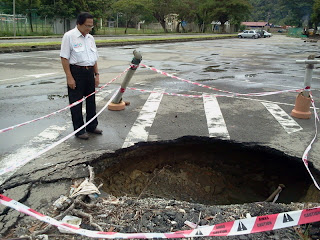 A BIG hole had appeared in the centre of the car park that was used by the old land and survey department in front of the State Mosque in Sembulan, Kota Kinabalu and it posed danger to car drivers and passer-by.

Edward reminds the authorities to come to quickly repair the broken pipe and fill up the hole in the car park before someone or car falls into the deep hole.

A similar big hole also appeared in the main road at Kampong Air in front of the KK Chinese Chamber of Commerce. This deep hole had caused traffic jam along the road due to drivers were trying to avoid it.

This hole also believed to be caused by a broken sewerage pipe underneath the road because there is a sewerage manhole cover just beside it. DBKK or JKR must come to repair the broken pipe and fill up the hole. The hole is creating traffic jam and danger to drivers.