AKJAN, GO AHEAD AND SUE! 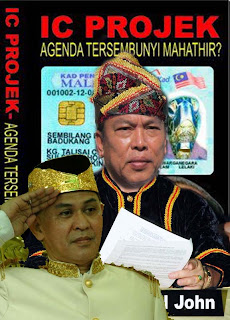 DATU AKJAN’S media conference in which he said that there was never an Projek IC and the call for an Royal Commission of Inquiry (RCI) was ill-intended and can damage interracial relations was the strangest event with the most stupid statement I have ever seen in my years of political observations!

I know that in politics we may sometime meet certain characters who are extra daring and say a lot of shocking things, purposefully to agitate society for the sake of cheap publicity. But there is a limit to everything.

One can overdo things and behave in a way that goes beyond what is acceptable and respectable, and this is what Akjan had done to himself. It seems that he had not learned anything form his huge blunder in declaring himself as Sultan of Sulu on Malaysian soil.

After all the nationwide ridicule and insulting remarks about him because of the declaration, and after the arrest and investigation, it seems he has not grown up enough to behave in a civil and educated manner.

Now he had taken a most ridiculous action by saying there was no such thing as a Projek IC, when in fact he himself was arrested under the ISA for his direct involvement in the project.

I fully support Datuk Wilfred Madius Tangau for pointing out to Akjan about the court ruling in the election petition for Likas, in which the judge made a ruling based on the sworn testimony if Hassnar Ibrahim about his involvement in Projek IC. Why doesn’t Akjan make a statement to say that Hassnar Ibrahim, Jabar Khan and many others who had confessed about their involvement in the project, are liars?

And why not also say the judge in the Likas election petition was unprofessional and should be defrocked and disbarred? Why not sue these people, including the judge?

But now Akjan is saying those people who want the RCI are causing the ill-feeling. What kind of logic is this? The whole state wants and RCI except for him, why? Obviously Akjan is trying to defend the illegal immigrants and wants the huge problems of illegals immigrants in Sabah to continue and become worse. Again, why?

Is it because he himself is an illegal immigrant who managed to get a MyKad through his own Projek IC (as proven by Mutalib M.D. in his book IC Palsu)? How come he had sued Mutalib? By his statement we are reminded that Sabahans are losing their position as masters of their own future, because now an immigrant is saying it is wrong to investigate illegals.

If Akjan really believes there is no Projek IC and no illegal immigrants, why not let this be proven with an RCI? The RCI will clear up everything, and settle the issue once and for all. There will be no ill feeling against anyone, including aliens, as long as they are legal.

What we don’t want is a lot of questions about people like Akjan claiming to have been born in Limau-Limauan Kudat but the people there swear they don’t know him, or Pakistanis holding ICs saying they are from a village in Ranau and they don’t know a word of Dusun. Are the people of Semporna happy that they are being outnumbered by aliens by five to one?

So if Akjan is offended and believes he is right, I challenge him to go ahead and sue. By suing and the case going to trial we will be able to know the real story behind why he was arrested under the ISA for manufacturing false ICs, how many aliens benefited from his unpatriotic act, how much money those people involved managed to make to enrich themselves, and whether Akjan himself is an illegal immigrant.

He had admitted that he is not a Malaysian by declaring that he is the Sultan of Sulu. His personal history raises a lot of questions, but he has all the opportunity to prove himself by proceeding to sue on the matter. But then again, I would also like to ask if he still considers himself a Sultan of a foreign country, in which case he has no business trying to be a Sabahan and a Malaysian or interfering in our state affairs.